Ipoh mayor Datuk Rumaizi Baharin said the pilot project would focus on safety and also to rebuild the economy in the area post-Covid-19.

“With our plans to develop the city’s economy, we will be seeing a further effective and realistic recovery phase.

“This will also help to boost the city’s economy and credibility, ” he said during the city council full board meeting at its headquarters here on Friday (Feb 26).

“We also want to make the area a modernised Islamic part of the city, ” he said, adding that the project would also help to maintain the harmony between the races in the city.

Manjoi is a mostly Malay-populated area, with more than 57,000 residents.

Rumaizi said under its 2021 Budget, the city council would create various incentives and plans to develop the economy.

“It will be in line with our theme, ‘The well-being of Ipoh folk’, ” he said.

“The council has allocated some RM46mil for the city’s development agenda such as repairing public facilities, cleaning and maintaining the city, ” he added. 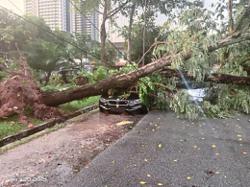