‘Fragile Life’ featuring a cocoon symbolising new lives that are at risk of exposing themselves to the virus represented by the face mask.

EVERY morning Ow Chong Boon would spend at least an hour practising Chinese calligraphy at his home in Jalan Kajang, George Town in Penang.

Besides Chinese calligraphy, Ow does Chinese painting when he is in the mood for it.

The 57-year-old art director who contracted polio when he was three years old, said he learnt Chinese calligraphy when he was in secondary school but picked up the skill again two years ago.

“Prior to the MCO, I developed my skills only when I was free.

“Since we are not allowed to go out during the MCO, I delved further into calligraphy art to sharpen my skills.

“This year, I decided to put my skills to good use by writing Chinese calligraphy on spring festival couplets or chun lian for my friends and family.

“I even improvised the wordings to make them associated with the Covid-19 pandemic, ” he said.

The red scrolls are usually hung on the doorways of some Chinese homes during the festive season.

Ow added that he got creative by using rhymes on his chun lian.

“Although it is tough, we have to work together in order to win the fight against Covid-19, ” he wrote on a couplet.

“I used to practise on rough paper and old newspapers but now, when I get the inspiration, I can straight away write them down on the couplets. It takes me less than five minutes to produce a set of couplets.”

Ow never allowed his disability to stop him from designing Chinese calligraphy and drawing Chinese paintings.

“It is not challenging at all since

I am not doing hard work.

“Painting Chinese calligraphy has a calming effect and I can sit here for hours just doing it, ” he said.

Meanwhile, Ow painted several Chinese paintings and one of them has a face mask wrapped around a cocoon on a tree.

“The painting is called ‘Fragile Life’ and the cocoon symbolises new lives that are at risk of exposing themselves to the virus, which is represented by the face mask.

yu (abundance and surplus for every year), birds symbolising the intoxication of a beautiful spring day and bamboo symbolising safety and health, ” he said. ‘Fragile Life’ featuring a cocoon symbolising new lives that are at risk of exposing themselves to the virus represented by the face mask.

Birds symbolising the intoxication of a beautiful spring day.

Ow showing the spring festival couplet (chun lian) that he designed with a Covid-19 theme. 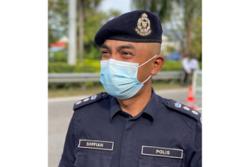