AFTER more than five weeks of being closed due to the movement control order (MCO), the hiking trails from Moon Gate and the Penang City Park leading up to the Point Five rest area became littered with leaves making it dangerously slippery for hikers.

On Tuesday afternoon, 20 hikers temporarily put aside their walking sticks and brought along brooms and rakes instead to sweep the trail from Moon Gate to the Point Five rest area.

The 1.1km trail was carpeted with dry leaves as it was closed by the Penang Island City Council (MBPP) from Jan 14.

It was reopened on Monday but hikers found it dangerous as the dry leaves could cause them to slip and lose their balance.

The rest area is said to be one of the most popular hiking rest stations in the country.

It has been estimated that some 5,000 people would hike there weekly.

“Our members felt we should clean the path quickly for the safety of hikers including the children.

“Most of the participants of the cleanup were senior citizens who trek the hills almost daily to keep fit,” he said, adding that task was completed within three hours.

Lim said some hikers who were passing by also gave assistance and many applauded their effort.

The oldest participant Ooi Beng Soon, 77, said he was glad to give a helping hand.

“We want to do good for the hiking community. The cleaning was done in the spirit of volunteerism.”

Datin Sharon Choong, 63, said she had never taken part in such a cleaning activity before.

“I was thrilled. I felt happy that I had contributed my time and energy for a good cause.”

Another participant K. Suthakar, 59, said he was amazed with the energy shown by the senior citizens, some of whom are in their 70s.

“They went about completing the task enthusiastically. It was good to see their team spirit,” he siad.

Up at the Point Five rest area, couple Tay Eng Chye, 56, and Jessica Cheah, 54, were spotted cleaning up the place by raking the leaves and washing the stainless steel coffee cups.

Other hikers also helped by washing the utensils, watering the plants and wiping the tables.

Businessman Tay, who had been hiking for the past 14 years, said he and the other hikers had been clearing up the area for the past two days.

“There’s still a lot to do but we will take it one day at a time. I’m just glad to be able to hike again after the reopening of the trail,” he said.

Another hiker Lee Tick Khoon, 64, who was seen busily watering the wilted plants, said he was glad to get out of the house to exercise.

“I’ve been unable to get a good sleep since the MCO but after hiking for the first time in weeks on Monday, I was able to sleep soundly that night.

“It is also good to see my hiking friends after so long. When we hike, I always ensure that we practise physical distancing,” he said when met. The group of hikers, with several of them in their 70s, volunteering to rake leaves along thepopular hiking trail.

Volunteers clearing the steps of leaves to prevent hikers from slipping and losing their balance along the popular hiking trail. — Photos: LIM BENG TATT and BERNARD SEE/The Star 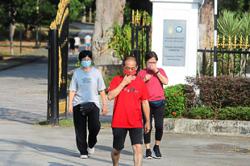