THE Seberang Prai City Council (MBSP) has launched a ‘Scan, Park and Pay’ programme for the convenience of the public to pay bills instead of crowding its centralised counters at Bandar Perda, Bukit Mertajam, Penang.

All you need to do is just to stay in your cars, and scan the QR codes provided by the security personnel at the MBSP headquarters in Bandar Perda here, said mayor Datuk Rozali Mohamud.

“After scanning the QR codes, the MBSP portal will be displayed on your mobile devices, where you can select the services.

“Choose the bill to pay, such as assessment rate, stall rental, or compounds.

“Fill up the necessary details, enter payment details and check out to pay. That’s it, ” he said after launching the service at the council’s headquarters in Bandar Perda yesterday.

The smart service is meant to prevent overcrowding at its centralised counters.

“There is no need to crowd and queue up at the counters. All transactions can be done from inside the vehicles within the parking lots, ” he said.

“The council’s premises are sanitised between nine to 18 times daily.

“The centralised counters record an average of 650 visitors daily.

“But we are in full compliance with standard operating procedures, such as disinfecting the premises on a regular basis. We still encourage the people to make transactions online. 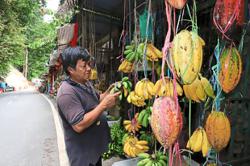