JKR contractors have begun the earthworks for construction of the overhead pedestrian bridge at Mile 4, next to SJK (C) Pui Ying.

PUPILS from SJK(C) Pui Ying at Mile 4 will no longer have to dice with death while trying to cross Jalan Kapar as a pedestrian bridge is being built on government land next to the school.

Klang District Public Works Department (JKR) Roads section engineer Kamazul Syazana Kamarulzaman said the bridge would give pupils a safer route to school instead of crossing Jalan Kapar, which has a high volume of traffic.

SJK(C) Pui Ying has 1,337 pupils with 88 teachers and clerical workers.“Construction of the elevated walkway that is funded by the Federal Government-funded is estimated to cost RM3.8mil, which will include the relocation of utility pipes and cables, ” she said.

Construction work started in December last year and is estimated to be completed in June.

Kamazul added that the bridge would also allow those living on both sides of Mile 4, Jalan Kapar to get across easily, instead of having to use a car or motorcycle just to get to the other side.

Klang Consumer Association president Devadass Anjan said the elevated pedestrian bridge was much-needed as pupils, workers and people who live in the area risked their lives when trying to cross during peak hours.

“Our association members are glad that Klang district JKR contractors have begun the earthworks.

“The location chosen for the pedestrian bridge is ideal as it is safer for schoolchildren. We want Klang JKR to use the government land for the bridge as it will benefit the locals, ” he said.

Sementa assemblyman Dr Daroyah Alwi said construction of the pedestrian bridge was of paramount interest to the locals, including the pupils of the Chinese school, to ensure everyone’s safety.

“I hope to see this pedestrian bridge built as planned, ” she added. 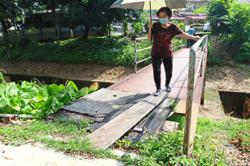