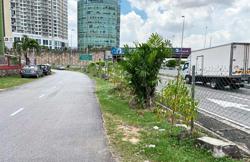 (Front row from left) Before MCO 2.0, Jaz Leen, Rachel, Abby and Sarah spreading compost in the planter box they built on the edge of the field in their Damansara Kim neighbourhood in Petaling Jaya.

A GROUP of youths in Petaling Jaya are spearheading green living initiatives by repurposing garden waste in their neighbourhood.

While it is common to see these youths play games at the SS20 Damansara Kim, Southern Zone field, they have now joined hands to work on a sustainable development project.

Ten youths, aged between 10 and 24, have taken the lead on a composting project to convert waste into fertiliser. The project started last year.

They are composting the garden waste at their neighbourhood’s football field, which is also a playground located in Jalan SS20/5.

With the support of their parents and senior citizens in their neighbourhood, the youths regularly work at the composting site which is located at a corner of the field.

The youths are actively involved in the project as volunteers, and so far they have not required any funds for it.

They do not mind getting their hands dirty or seeing worms crawl in the soil during the composting process. The youths have embarked on a composting project since last year, with guidance from their parents and senior citizens in the neighbourhood. Photo taken before MCO 2.0.

Members of the group meet weekly, for about an hour, to carry out the composting activity.

Their future plan is to get restaurants in the neighbourhood to give them vegetable waste.

“I was inspired to kick-start a composting project, so I did some research online.

“I explored various composting techniques until I found the most suitable one, ” said Lee, who is a final-year medical student.

He later managed to rope in more youths for the project with the help of Thong.

“MBPJ has provided large rubbish bins in the neighbourhood for residents to discard their garden waste.

“Every two weeks the cut grass and garden waste are thrown into the bin.

“However, I noticed there was extra waste discarded beside the bins.

“I decided to compost this organic garden waste through the hot composting method, where both dried and green leaves are used, ” he elaborated.

By mixing two bags of dried leaves and one bag of green leaves, the composting process can take place.

“Based on what I have read, it takes between two and three months to have the final compost. “If we add new wastes into the pile, it will then take longer, ” said Lee.

He said the containers used for the composting were made from old wooden frames and items discarded by neighbours.

“The biggest problem is that we need to constantly turn the leaves for faster results.

“There are worms, and it gets dirty and muddy when it rains.

“Some of the project participants were not used to getting dirty at first. However, we eventually got used to it, and seeing the end product is fulfilling and rewarding.

“Working with the younger members can sometimes be interesting. They get distracted easily.

“Explaining the process along the way helps them to stay focused on the task.

“When everyone feels like they play a key part in the process, we get things done better as one team, ” he said.

He added that turning over the compost manually was no easy task as it required a lot of strength.

However, the group is pleased when they harvest the compost and use it as fertiliser for plants in their neighbourhood.

Lee said the team also built several planter boxes in the park and the sunflowers they had planted were blooming well.

He hopes someday all neighbourhood fields and parks will have their own composting projects spearheaded by their own residents.

“I don’t see why garden waste has to be sent to the landfill when we can compost and return it to the environment, ” he said.

Lafayette Victor, 10, is one of the younger project members.

He said he had always envisioned plucking fruits and vegetables grown in his neighbourhood park.

“We shredded newspapers, fruits and vegetables to make the compost.

“I think yesterday’s trash is tomorrow’s future. We have to manage it well.

“I hope we can plant vegetables in our gardens for our own consumption, ” he added.

Another volunteer, Zane Merican Noordin, 14, said he now saw value in garden waste since taking part in the composting activity.

Thong, who was bestowed the Unsung Hero Award by MBPJ during the Petaling Jaya Waste Summit 2017, is among the mentors for the project.

She said it was important to cultivate and encourage interest in sustainable activities among the younger generation.

“We should mould future leaders to be interested in matters related to recycling waste and the environment, ” she emphasised.

She said the Plastic-Free campaign by MBPJ instilled interest among her neighbours to reduce the use of plastics.

“We didn’t want these dried leaves to be packed in plastic bags and sent to the landfills. 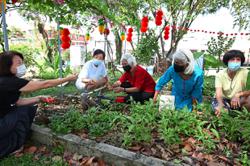