Traders setting up stalls outside their homes in Bandar Kinrara

An illegal food stall in front of a resident’s house in Bandar Kinrara 3, Puchong.

WE have heard of pickled mango traders dicing with danger on the streets at the expense of making a living amid these challenging times.

Now, some residents in Bandar Kinrara 3, Puchong, have resorted to setting up illegal stalls in front of their own homes with no qualms about getting caught.

A resident in the neighbourhood, who declined to be named, told StarMetro that these stalls sprouted like mushrooms as soon as the movement control order was announced from Jan 13.

“Most of these stalls are a one-man show. There is no control over them, let alone any standard operating procedure.

“We did not see this happening last year with the first MCO, because they were scared.

“But now people are brazen, ” the resident said, adding that customers who bought food from them were causing traffic congestion in the neighbourhood.

He said some motorists would not alight from their cars, but would order and receive the food through the car window, ” he said.

Other customers, he added, would crowd around the stalls with no physical distancing and in some cases, no face masks.

“This is scary because nobody cares. I understand they have to find ways to earn a living, but this is not the way to do it, ” he said.

The resident revealed that another hawker selling young coconut would leave the husks near the drain, resulting in mosquitoes breeding.

A Subang Jaya City Council (MBSJ) spokesperson said the matter would be looked into. 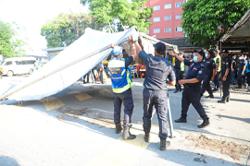