Plans for direct pineapple supply from farms to homes 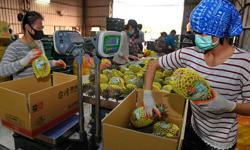 Malaysians could soon have fresh pineapples sent directly from farms to their doorstep.

“We are not only talking about the fruit but also other pineapple-based products that we are looking to market in order to make pineapple more accessible to a bigger market, ” he said.

Dr Sahruddin said although Malaysia was among the top 20 pineapple producers in the world, its production was largely for the local market.

Last year, according to him, Malaysia exported about RM492mil worth of pineapple products to over 20 countries – a 43% increase compared to RM343mil in 2019.

Among the countries that import Malaysian pineapples and its products are Singapore, China, Japan, Saudi Arabia and Egypt.

“Some 16,000ha of land are planted with pineapples in the country, with Johor producing about 54% of Malaysia’s total production.

“We export about 30% of our pineapples to overseas markets while the rest are for local consumption, ” he said, adding that pineapples were always in great demand both locally and abroad.

Dr Sahruddin said the fruit was categorised as the nation’s new source of wealth that could spur economic growth and, at the same time, provide better income to farmers and entrepreneurs.

This year, he said, RM15.35mil had been allocated to develop the country’s pineapple industry.

“This involves various programmes to support production and development of pineapple- based food industry activities, ” he added.

On another matter, Dr Sahruddin said the recent floods, which hit several states, had caused RM2.9mil in losses to some 79 farmers.

The former Johor Mentri Besar said the floods had damaged crops within a 62.55ha area.

“The damage involved 20 districts in six states. Pahang was the most affected with losses amounting to RM2mil.

“This was followed by Johor at RM760,000. Other affected states were Terengganu, Kelantan, Perak and Selangor, ” he added.

The board will be sending a report on the matter to the Agriculture and Agro-based Industry Ministry to seek financial assistance for the affected farmers under the Agriculture Disaster Fund.

Dr Sahruddin said the fund had about RM80mil and MPIB was requesting for RM2.9mil for the affected pineapple farmers.

“If the amount is approved, it will help the affected farmers to get back on their feet and meet the demand for pineapple both locally and overseas, ” he added.