The main entrance is filled with festive decorations that include some 20 colourful dairy cows and a unique ‘Combi’ car display.

Sutera Mall centre manager Farrer Tan said despite these unprecedented times, festivities must go on under a new normal to welcome the Year of the Ox.

“Our biggest Lunar New Year celebration started on Jan 22 and will last until Feb 11.

“The malls operating hours are from 10.30am to 8pm during the movement control order.

“Some 21 Chinese New Year booths have been set up at the Level 2 Atrium, where festive goodies such as traditional cookies, gift hampers, mandarin oranges, decorative items, flowers, and food can be found, ” she said during the launch of the campaign.

The mall is also showcasing Chinese cultural arts until Jan 28, including Chinese calligraphy, ang pow collections from 2008 to 2021 as well as paper cutting art.

“The calligraphy exhibition has works produced by the Johor Calligraphy Association while the paper cutting show highlights the works of Kow Yee Hwa.

“Among Kow’s artworks on display is one containing 666 cows, which earned her an entry in the Malaysia Book of Records for personal paper cut artwork with the most number of Chinese zodiac cows, ” said Tan.

Visitors can also redeem limited edition goodies from the mall during the festive campaign.

For purchases above RM88, shoppers stand to receive limited edition ang pow packets, which they can collect to solve a puzzle and win collectable items.

Tan said the public also stood a chance to receive online giveaways, including cash vouchers, through Sutera Mall Facebook live, which will be broadcast every Wednesday at 3pm.

A special Chinese New Year live show will be held on Tanah Sutera’s Facebook page at 4pm on Feb 20, where a feng shui master will share ways to enhance fortune, tips to buy a house and analysis for a home.

“To assist our fashion tenants who are unable to operate during MCO, we have set up an area where they can conduct their live broadcast that will be aired on their online platforms, ” Tan said.

She added that cultural performances, including lion and dragon dances, 24 drums, Chinese yoyo and Chinese orchestra, would be held from Feb 5 to 21. 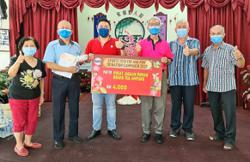 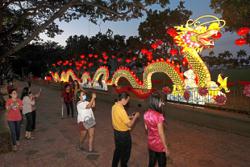