The bed and table arrangement at the MAEPS quarantine centre in Serdang is orderly.

THE Covid-19 outbreak in the country last year received much media coverage on the daily number of infections, but there was little about what those infected had to go through the moment they were diagnosed.

A “harrowing experience”, and feeling “alienated” and “shunned” upon returning home, are some of the descriptions by former patients.

Three individuals relate their story from the time they were diagnosed and underwent quarantine at government approved centres until they returned home.

StarMetro spoke to Arif, Sarina and Lim on condition of anonymity at different stages of their ordeal.

Until late December last year, Covid-19 was nothing more than a series of daily figures which Arif learned from the news.

That was until he became part of the statistics.

On Dec 27, the 32-year-old engineer tested positive for the virus, an event that would take him and his family through a whirlwind of emotions.

Arif recalled driving home from Ipoh, Perak after visiting his parents-in-law when he started feeling lethargic despite having done minimal physical activity.

This was accompanied by a throbbing headache and muscle aches, followed by a cold the next day.

“I went to a private clinic near my home in Sungai Buloh to get tested. Within 15 minutes, I got the results, ” said the father of two.

When he walked into the consultation room to get his results and saw the doctor donned in full personal protective equipment, Arif knew what was up.

He was told to quarantine at home while awaiting the results of his second test – which he got a day later – confirming he was Covid-19 positive.

On Dec 29, the Health Ministry contacted Arif, instructing him to stay put and wait for an ambulance to fetch him as well as his wife and two-year-old daughter – both of whom underwent testing after him and were found to be positive as well.

“The three of us quarantined in my bedroom. My parents who lived with us sent food to our room during this time, ” he said, adding that they also looked after their three-year-old son.

An ambulance transported the three to Hospital Sungai Buloh on Dec 31 at 10pm.

Arif vividly remembered the huge crowd waiting to be assigned a bed at the hospital on his arrival.

“It was like waiting to get on the bus during the balik kampung rush.

“I was confused. I didn’t know where we were supposed to go.

“Then one of the medical personnel told us to find a place to sit, saying it could take a while, ” he said.

At 2am, Arif, his wife and daughter were placed at the emergency room.

But their hope of staying in quarantine together was dashed when they learnt the following morning that they had to be separated due to lack of rooms catering to families.

“I was to be placed at the training institute while my wife and daughter would be placed at the hospital leprosy centre, ” said Arif, recalling how he had to separate and repack their clothes and toiletries.

He stayed at the institute for only one night, as he was moved again the next day – this time to the Malaysia Agro Exposition Park Serdang (MAEPS) quarantine centre.

The 35-year-old interior designer from Shah Alam recalled meeting up with her three friends at a restaurant for lunch on Dec 19.

She had strictly followed the Health Ministry’s advice to limit outings, only going out four times a month, at most.

But after having stayed at home for months, she could not resist meeting her friends that day whom she dearly missed.

On Dec 23, Sarina got a call saying that one of her friends had tested positive.

Sarina, her husband, parents-in-law, niece and nephew aged two and seven respectively, who lived with them, underwent testing.

On Dec 25, she received a call at 4am from health authorities saying that only she had tested positive.

Sarina isolated herself in her bedroom.

“I also began having symptoms, such as muscle aches and joint pains, ” she said.

On Dec 28, an ambulance took Sarina to Hospital Sungai Buloh.

She was later transferred to a training institute nearby where she stayed throughout her quarantine period.

The 52-year-old videographer from Taman Desa, Kuala Lumpur decided to get tested after experiencing loss of smell, headache, a runny nose and constant fatigue on Dec 30.

“I phoned for an appointment at a private clinic. They asked me to go in on Jan 3 as they were closed during the new year, ” he said.

He quarantined at home starting Jan 5 after testing positive.

He was later taken by ambulance to MAEPS on Jan 11 and stayed there until Jan 14.

Lim said everyone was required to report any symptoms while staying there, after which they would be given a medical checkup.

He recalled his bunkmate’s quarantine duration was extended by three days after developing a cough.

The centre was no place for a staycation, but it was acceptably liveable, said Arif.

“I had seen social media posts claiming that the place was bad.

“But it was actually alright. We were given three meals daily – at 8am, noon and 6pm.

“Although the bathrooms and toilets were shared, they were cleaned regularly.

“The only negative part was that the lights were always switched on and it would get noisy whenever new groups of patients arrived, ” he said, adding that security was tight.

“It was like an army camp. The place was heavily guarded by soldiers outside.

“There was only one entrance and one exit. Once you are in, there was no going out, ” he recalled.

Arif admitted that being kept at a quarantine centre took a heavy toll on his emotional and mental well-being.

“You don’t know anyone around you and there’s barely anything to do while you’re there.

“The only personal space you have is your own bed. Everything else is public space, ” he said.

Luckily for Arif, he formed a friendship with fellow patients of his age group, with whom he could share his worries.

“I took solace in knowing there were others who were going through the same predicament and understood the feelings I was having, ” he said.

Lim too said socialising was crucial for patients in quarantine to retain their sanity.

“Some brought card games, which they played with others. It helped to break the ice and start conversations, ” he said.

Lim took to helping the staff at the centre to take his mind off things.

“The staff could always use help to distribute food and bedding items to the patients.

“Some of us offered to help because we knew they were shorthanded, ” he said, adding that his experience at the centre had given him a renewed perspective on humanity.

“It didn’t matter what race we were. We all slept under the same roof.

“There was this unspoken sense that we were all in this together.

“Everyone was cordial and helpful. In that centre, we were all Malaysians, ” he said.

Reality strikesFor Arif, the most emotionally excruciating aspect of the quarantine experience was the thought that he might not be able to see his loved ones again.

“I couldn’t help but wonder whether my body would be strong enough to fight the virus so I could live to see tomorrow.

“I kept thinking what if the day I was taken away was the last day I saw my son?

“Did he understand why his father and mother had to leave him for a long period of time?

“These questions worried me very much and there was nothing I could do to distract myself from such thoughts, ” he said.

The experience, though harrowing, gave him renewed sense of what mattered most – family.

“Cherish your family. We don’t know how much time we have left with them, ” he said.

Arif hugged his son when he returned home on Jan 8.

“We spent all day together while waiting for my wife and daughter who were to be discharged the next day.

“Covid-19 might have weakened me physically, but it has only strengthened my love for my family, ” he said. 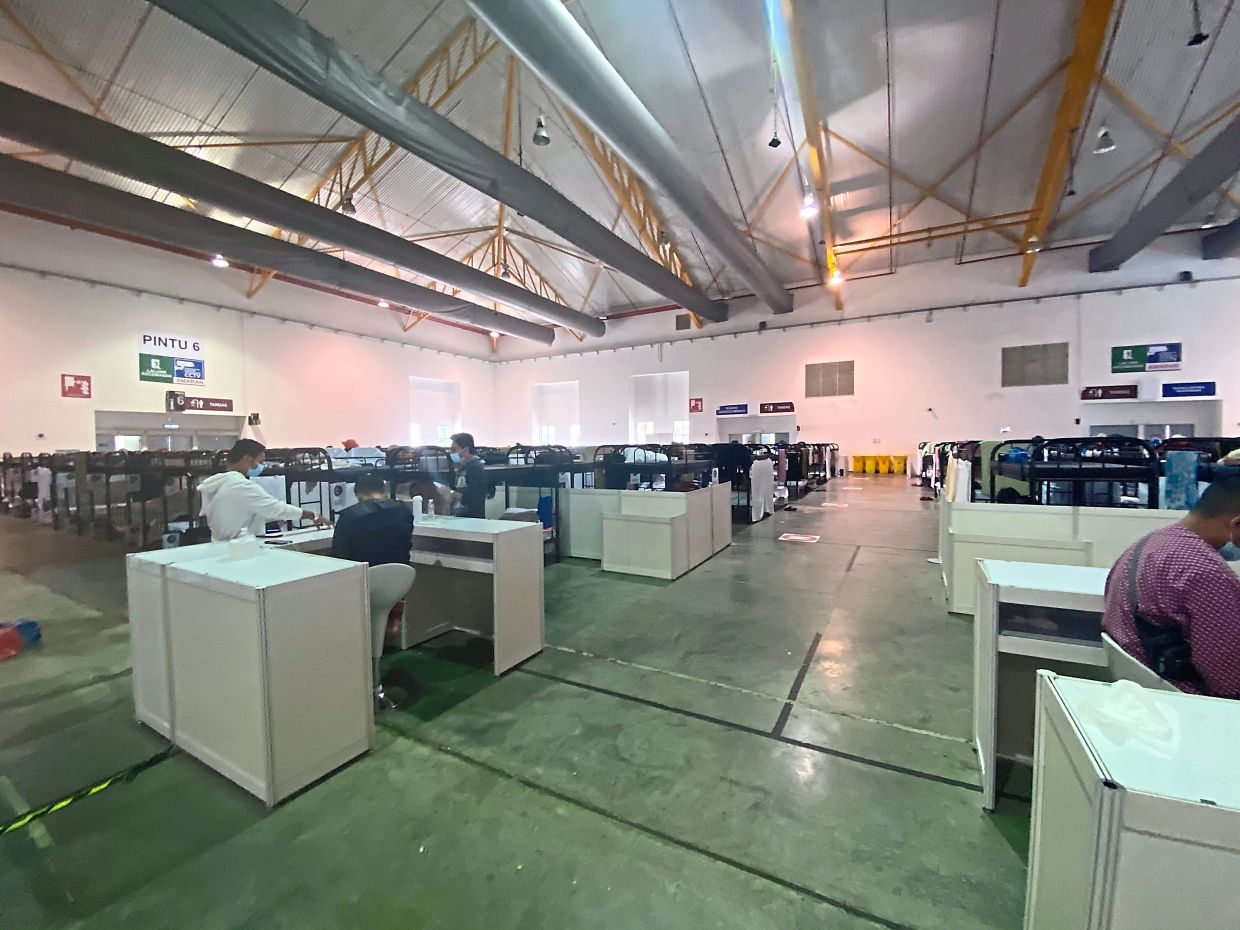 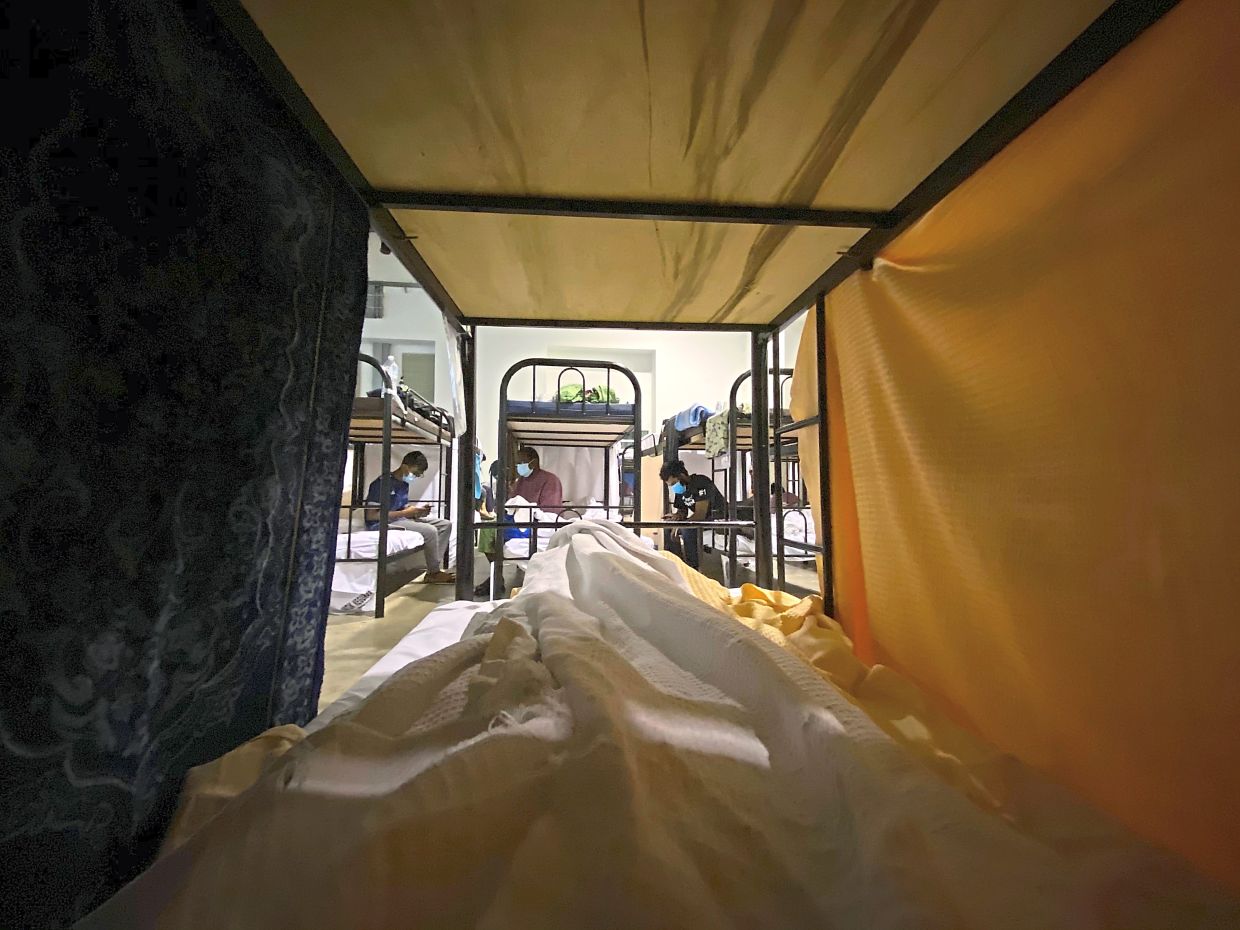 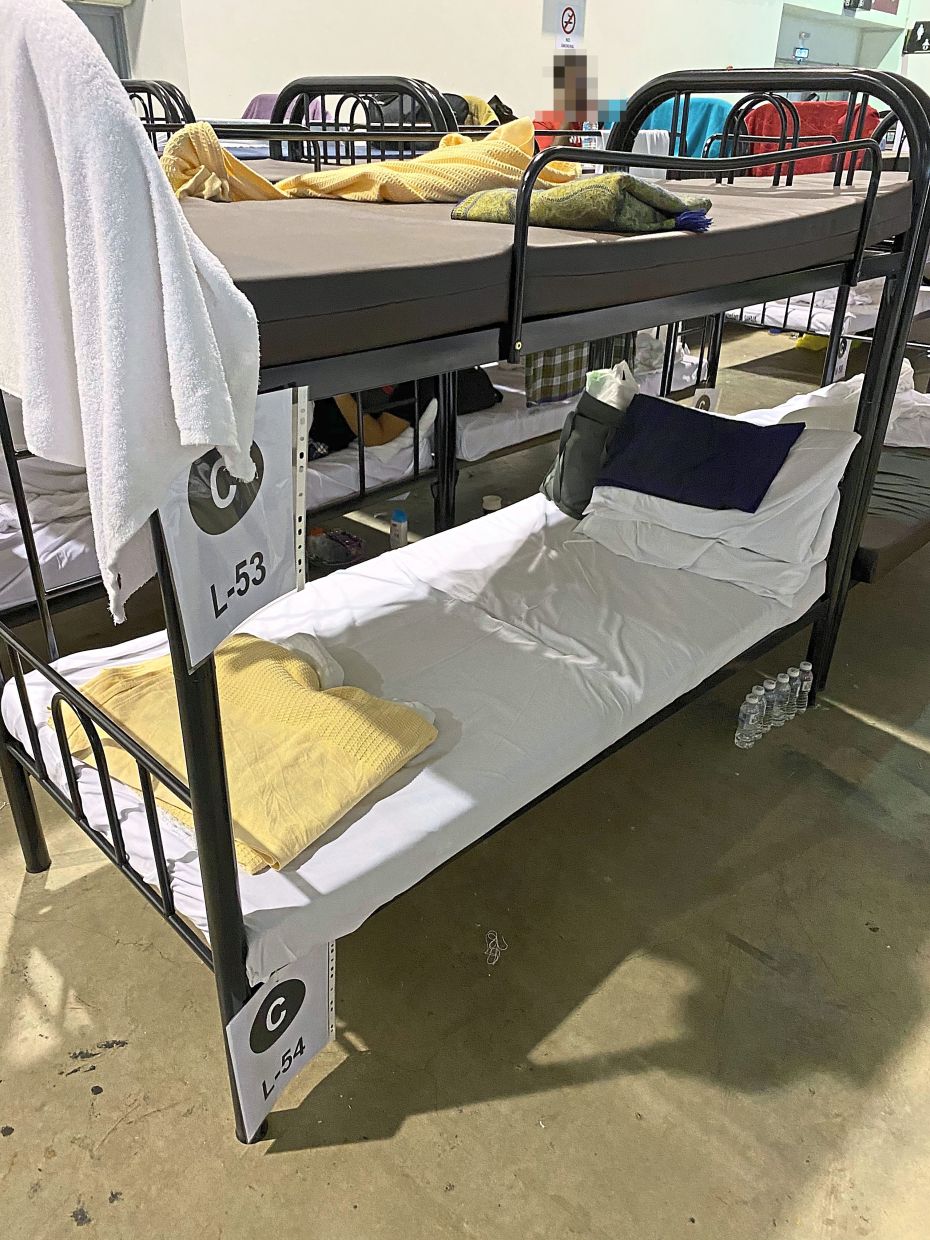 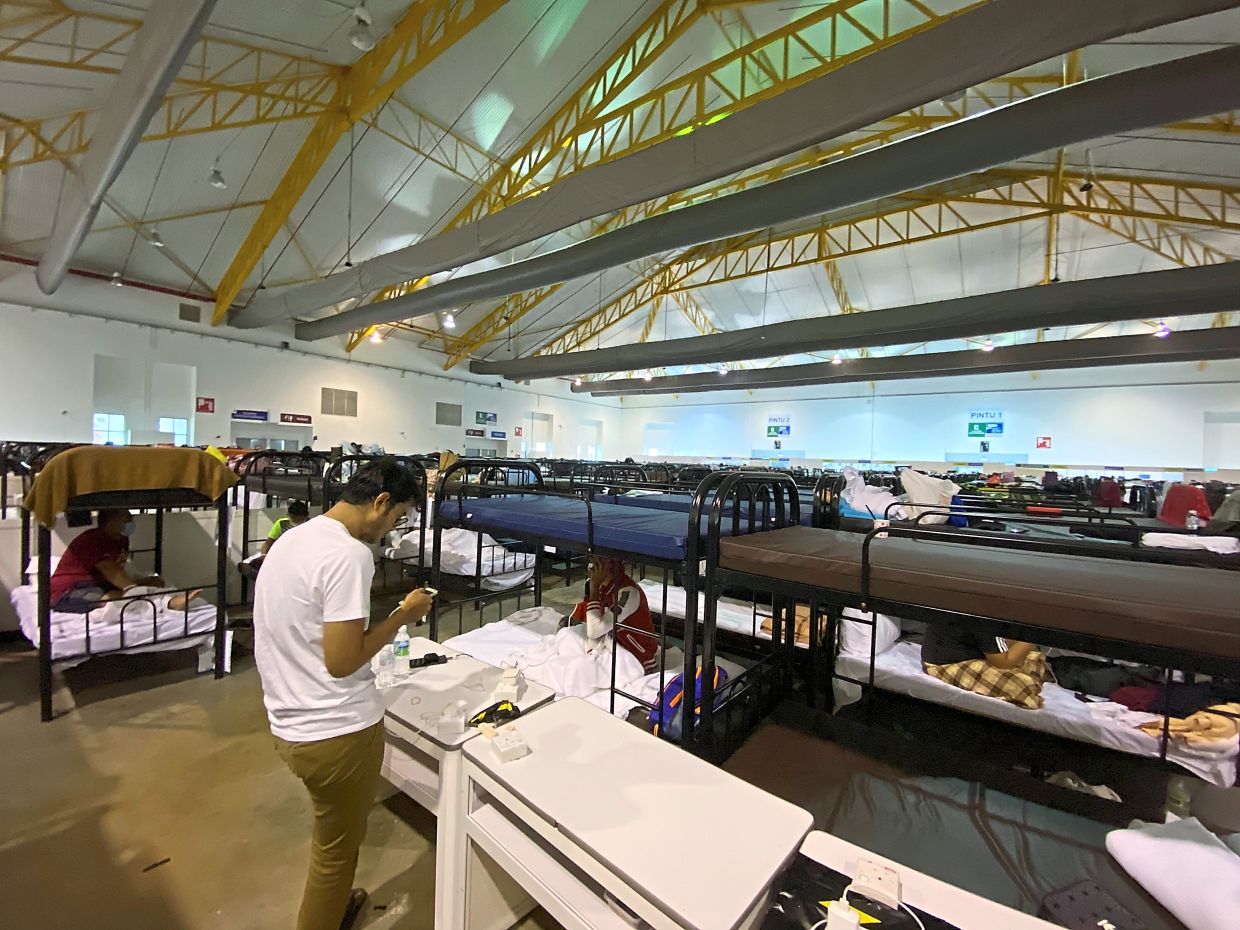 The bed and table arrangement at the MAEPS quarantine centre in Serdang is orderly.

A well-balanced meal is served three times a day at the quarantine centre.

Together in isolation: Covid-19 patients keeping each other company as a way to retain their sanity at the Malaysia Agro Exposition Park Serdang (MAEPS) quarantine centre in Selangor.

(note: cover eyes of man in pix) The bed is where Covid-19 patients at Maeps will spend most of their time.

Covid-19 patients queueing up to enter the MAEPS quarantine centre in Serdang.

Patients say sharing their worries with one another is crucial in helping them to make it through their stay at the quarantine centre.