Soldiers helping to unload mattresses for the quarantine centre in Kanowit.

THE rising number of Covid-19 cases in Kanowit, Sarawak, has prompted the authorities to set up a quarantine centre for patients with mild symptoms at the Kanowit indoor stadium.

As of Jan 23, the number of positive cases in Kanowit had shot up to 143 cases.

Soldiers from the Ninth Malaysian Infantry Brigade had a busy day on Friday helping set up the quarantine centre for Covid-19 level one patients.

Meanwhile community leaders in Kanowit were urged to get longhouse chieftains to ensure that residents follow the instructions from the Health Department to deal with the pandemic.

Kanowit district police chief Deputy Supt Tega Bilong said police would not hesitate to take stern action against those who defy orders from the authorities.

DSP Tega said this in response to an incident on Jan 22 at Rumah Dim, Machan where a Covid-19 positive patient created a commotion by going against the instructions of health department personnel.

Officers from the department went to the longhouse to take the patient to the hospital for treatment.

However, the senior citizen refused to go with them and police had to be called, after which the patient finally complied.

“We were informed that about 42 residents of the longhouse were found positive for Covid-19.

“Some of them had threatened health personnel who came to take them to hospital, ” said DSP Tega.

He urged residents from longhouses to cooperate with the authorities in battling Covid-19.

Meanwhile, a possible extension of the movement control order is occupying the thoughts of Sibu Division residents.

They are worried that the MCO, which is due to end on Jan 29, may be extended.

Senior Minister Datuk Seri Ismail Sabri Yaakob had on Jan 21 announced that the MCO for Penang, Selangor, Melaka, Johor, Kelantan Sabah and three Federal Territories was extended to Feb 4 following a rise in Covid-19 cases over the last two weeks.

A general manager of a property development company, Eddy Puah, 52, said an MCO extension in Sibu would inflict more hardship on the people.

“If the MCO is extended, it is going to affect our livelihoods.

“Those in the private sector are not in favour of an extension as it will have a big impact on our income, ” he said.

Puah said for those who still have a job, each MCO increases the likelihood of them being laid off as companies may run into bigger losses. 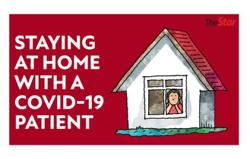