Residents of Kampung Desa Aman and Sri Aman Heights in Sungai Buloh, have had to drive on a dark main road for the past two years.

THOSE living in and around Kampung Desa Aman, Sungai Buloh, have had to put up with pitch-dark roads for the past two years because of lack of proper street lights.

Sri Aman Heights residents said the complaints they had lodged with the authorities since 2018 seemed to have fallen on deaf ears.

StarMetro visited the area after 8pm and discovered that the particular stretch from Jalan Kuala Selangor to the railway bridge tunnel and up to the access road in Jalan Utama was dangerously dark. The situation was made worse by heavy rain.

Lorries ply Jalan Utama, which is a double-lane road near an industrial area. The street leads up to Sri Aman Heights.

Tan Hak Sieu, 67, said the authorities constantly passed the buck to one another since the first email was sent by Sri Aman Heights Residents Association (Sahra).

“We first sent a complaint to Selayang Municipal Council (MPS) in 2018, because we thought that since the affected area was after the railway tunnel, it would be under MPS’ jurisdiction.

“But the council took a while to get back to us, and when they did, they said it was under Petaling Jaya City Council’s (MBPJ) jurisdiction.

“Then in 2019, MBPJ replied to us saying that they had no budget to repair the street lights.

“MBPJ told us to lodge a complaint with the Public Works Department (JKR), ” he told StarMetro.

In 2019, Tan’s complaint was sent to the Selangor JKR office.

“An officer replied saying the location fell under the Petaling district JKR office or the federal maintenance division and funds were needed to repair the lights.

“The officer also said the Selangor JKR electric division would apply for additional funds to repair the street lights. There was no follow-up after that.

“We even enquired with a contractor working on the MRT 2 project at the location, and they informed us that it was ‘out of their work area’ and we should go back to JKR.

“Until today, nothing has been done, ” said Tan.

The Sahra member said the road was most dangerous at night during rain when visibility was extremely poor.

“This is also a flood-prone area.

“Someone has to be responsible for making sure the public is safe, ” he said.

Bukit Lanjan assemblyman Elizabeth Wong said she would look into the problem and find out which agency’s jurisdiction it fell under.

“It is a service road, so it should fall under MPS.

“If that is the case, MPS has to apply to Tenaga Nasional Bhd to repair the lights.

“However, it often involves multi-agencies but it can be done.

“If we look at the map of the area, the jurisdiction of MPS, MBPJ and Shah Alam City Council intersects, ” she added. 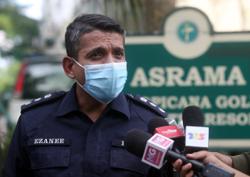 Linear park ‘will be a boon to residents’
MBPJ: Limited gates open at Old Town market for crowd control
700 pothole complaints recorded in 41 days
Buses forced to detour as access route blocked by parked cars
Coordinated effort to ensure all sectors in Sibu division adhere to SOP
First ever 3.3 POPULAR online book fair
Hoping to keep head above water
Call to put council staff in priority list for vaccination
Happy to get dose of own medicine
Island park a natural habitat for mangrove trees and migratory birds