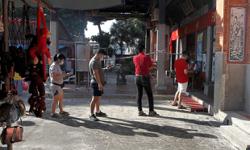 Representatives from charitable organisations and associations showing their cheques at the Goddess of Mercy Temple in Jalan Masjid Kapitan Keling, George Town.

THE Goddess of Mercy Temple (officially known as Kong Hock Keong) in Penang gave out RM26,500 in financial aid to 20 local charitable organisations and associations.

The donations certainly came in handy for the organisations in view of the Covid-19 pandemic.

Malaysian Buddhist Association Cheng Huah Kindergarten principal Lim Shui Li, 56, said she would use the RM1,500 aid to pay for the utility bills.

“We only charge a monthly fee of RM160, ” she said, adding that there are over 30 children in the kindergarten.

Ang Chui Kheng, 58, a teacher at the school for mentally challenged children in Jalan Datuk Keramat, said they would use the RM1,000 received to buy stationery and fitness equipment for the 70 children there.

“Besides government grant, we depend a lot on donations from non-governmental organisations.

“With this money, we will be able to buy a trampoline for our children, ” she said.

Ramakrishna Ashrama Penang treasurer Raman Athappan, 61, said the money would be used to pay for the education and day-to-day activities of the 40 children at the home.

“We are thankful for the RM1,000 received. Due to the pandemic, donations have been running low since last year, ” he said.

Representatives from the charitable organisations received their cheques at the temple in Jalan Masjid Kapitan Keling in George Town recently.

Meanwhile, Kong Hock Keong board of trustees vice-chairman Tan Kok Chye said the temple had been doing charitable work since it was built in 1800.

“Besides donating to charitable organisations, we have also been giving out ang pows to the elderly and the poor at the Penang Chinese Town Hall every year.

“However, due to the pandemic, we have to cancel the event this year, ” he said.

Besides the Goddess of Mercy Temple, the board of trustees also manages the Jade Emperor Temple in Ayer Itam and Tua Pek Kong Temple in Perak Road.