THE Penang government has completed the first phase of the RM378,000 flood mitigation project in Solok Van Praagh in Jelutong.

State transport committee chairman Zairil Khir Johari said the project, meant to reduce the impact of flash floods in the area, was carried out between January and October last year.

Among the works carried out was increasing the size of the existing drain that could now withstand a higher water capacity.

Other project components were the construction of four box culverts, two retention ponds and a jogging track.

“The two retention ponds were built to connect with the drain.

“This is so that the water can be directed to flow out to the Jelutong river.

“In the case of heavy rain, the retention ponds will be able to withstand a total of 1,500 cubic metres of water.

“Other project components like roadworks, road widening and road resurfacing along with reconstruction works were also completed as well, ” he said during a site recent inspection. (From right) Ong and Zairil discussing the flood mitigation project during a visit to the project site in Solok Van Praagh in Jelutong, Penang. – Photos: ZHAFARAN NASIB/The Star

Zairil said on top of the flood mitigation works, a 220m-long jogging track was also added to beautify the area.

“This project has proven to be effective as there were no floods despite heavy rain recently.

On the second phase of the project, Zairil said they would call for tender as soon as possible.

“This will take about two years, as it involves building an underground retention channel.

“We have identified a few locations and will need to get consultants to come in to check, design and present everything to the state Drainage and Irrigation Department.

“The upcoming project could be a solution to the flood woes in this area but we expect works for this phase to cost a few millions of ringgit, ” he added.

Batu Lanchang assemblyman Ong Ah Teong, who was also present, said they were looking forward to a long-term solution for the flood woes here.

He hoped the next phase of the project could start soon. 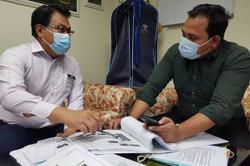