A PROPERTY agent is unhappy with a maid agency in Johor Baru for not being upfront about the health of its Indonesian maid.

Then Jaan Lih said he had engaged the services of the company located in Bukit Indah to employ a maid from Indonesia.

“All in, I paid RM15,800 to the company; RM8,800 was paid after the maid arrived at our house, ’’ Then said when met outside the Johor Baru Consumer Claims Tribunal at Menara Ansar.

His family desperately needed a maid when his existing one decided not to extend her contract after working here for about two years.

The former maid was responsible for taking care of his two children, aged three and two, at that time.

Then said the family needed a maid as his wife, a teacher, had given birth last January.

He said the family was initially happy with the new maid as her job was only to take care of the three children.

The maid, Then said, was hardworking and the children were close to her but he noticed something wrong after two weeks.

“She got tired easily and had no energy to do her work.

“She spent most of the time sleeping, ’’ he said.

The maid also started coughing badly so the family decided to send her for a medical check-up at a private clinic.

However, the doctor informed the family that there was nothing seriously wrong with the maid and prescribed antibiotics and cough medicine for her.

“But her condition did not improve and her cough got worse, ’’ Then said, adding that on Feb, 4,2020, the family sent the maid to the Sultanah Aminah Hospital for a check-up.

He said the doctor there told the family that the maid was suffering from tuberculosis (TB).

Then then informed the maid agency about the maid’s condition but the company claimed that she had passed her medical check-up in Indonesia before coming to work in Malaysia.

“The agency even claimed that the maid was given a clean bill of health by a Fomema-appointed clinic in Johor Baru, ’’ he said.

Fomema is the company tasked with running the foreign workers medical examination screening system in Malaysia.

Then said when he asked the company for a replacement maid, it was unable to do so as there was no one available.

The agency told him that it would be a long time before the family could get a new maid from Indonesia due to the Covid-19 pandemic and the movement control order.

Then said he regretted that the company was not more helpful as it was responsible for having sent a maid with health problems.

“My wife and I are not taking any chances as we have three small children and TB is a contagious disease, ’’ he added.

The family had bought a one-way plane ticket to send the maid back to Indonesia.

Tribunal president Ooi Chooi Gaik ordered the maid agency to reimburse RM15,800 to the claimant within 14 days.— By ZAZALI MUSA 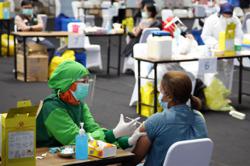