Vegetable, fruit and seafood wholesalers in Pasar Borong Kuala Lumpur in Selayang are operating as usual to meet the demand in Klang Valley during the movement control order despite having more than 15 Covid-19 cases among fishmongers and their workers.

“About 10 stalls had to be closed while those who tested positive are not allowed to operate.

“We are still waiting for the results of the other seafood sellers from the Health Ministry, ” he said.

Sing said although some of the stalls had temporarily ceased operations due to Covid-19 infections involving fishmongers and their workers, the supply chain was not affected.

“Normally, demand for supplies would peak one month before Chinese New Year but there is a reduction in seafood this year because of the rainy season.

“About 50% of the fishermen were unable to go to sea because of a shortage of foreign workers.

“The demand for seafood had reduced so we are still able to cater to needs, ” he said, adding that the cost of fish remained high due to the drop in supply.

During the first MCO in March last year, there was a shortage of vegetables for a short period. But that is not the case now.

“There is no supply disruption like last time as we are adhering to the government’s standard operating procedure.

“However, around 2,000 workers from the vegetable section will undergo swab test as we had one Covid-19 positive case.

“Those in close contact with that worker are undergoing quarantine for 10 days, ” he said.

“We expect less crowd over the next few days as a lot of people had come to purchase the goods last weekend after hearing about the MCO.

“We are thankful the authorities allowed our suppliers to unload the goods unlike the first MCO, when they were stuck in a long queue outside the wholesale market, ” she said.

According to Chin, Pasar Borong Kuala Lumpur now operates from 9am to 4pm and midnight to 6am daily, except Sundays.

“Compared to our normal working hours, which is from 5am to 5pm, the new timing is not suitable for us as most of our customers come before dawn.

“The association plans to discuss with Kuala Lumpur City Hall (DBKL) to have the timing revised, ” she said. 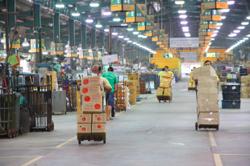