INSTEAD of sending their old and rickety vehicles to the scrap yard, some people have chosen to discard their vehicles in public areas in housing estates and even at private parking lots all over Johor Baru.

Some of these vehicles occupy precious parking bays in busy commercial centres.

Most of such cars become an eyesore over time as thieves start stripping the vehicles of parts — tyres, rims, bumpers, doors, bonnet, seats, exhaust pipes and other components that can be sold as spare parts.

Members of the public feel that such car owners are being irresponsible for abandoning the vehicles in public places instead of getting rid of them properly as they know the local council will tow them away, hence saving them cost. Some locals believe a number of abandoned cars could have been involved in accidents and that the owners did not have valid insurance.

The abandoned vehicles towed away by the city council included luxury cars.

However, there are city folk who think that a number of vehicles may belong to Johor Baru residents who are unable to return home from Singapore due to the Covid-19 pandemic.

Retired civil servant Datuk A. Sabapathy said the issue of cars being abandoned along streets, housing estates and other public places, in the city, had been going on for years.

“There was a car left by the roadside near Menara TJB and it took up two parking bays for months before it was finally towed away by the local council.

“It was such an eyesore. 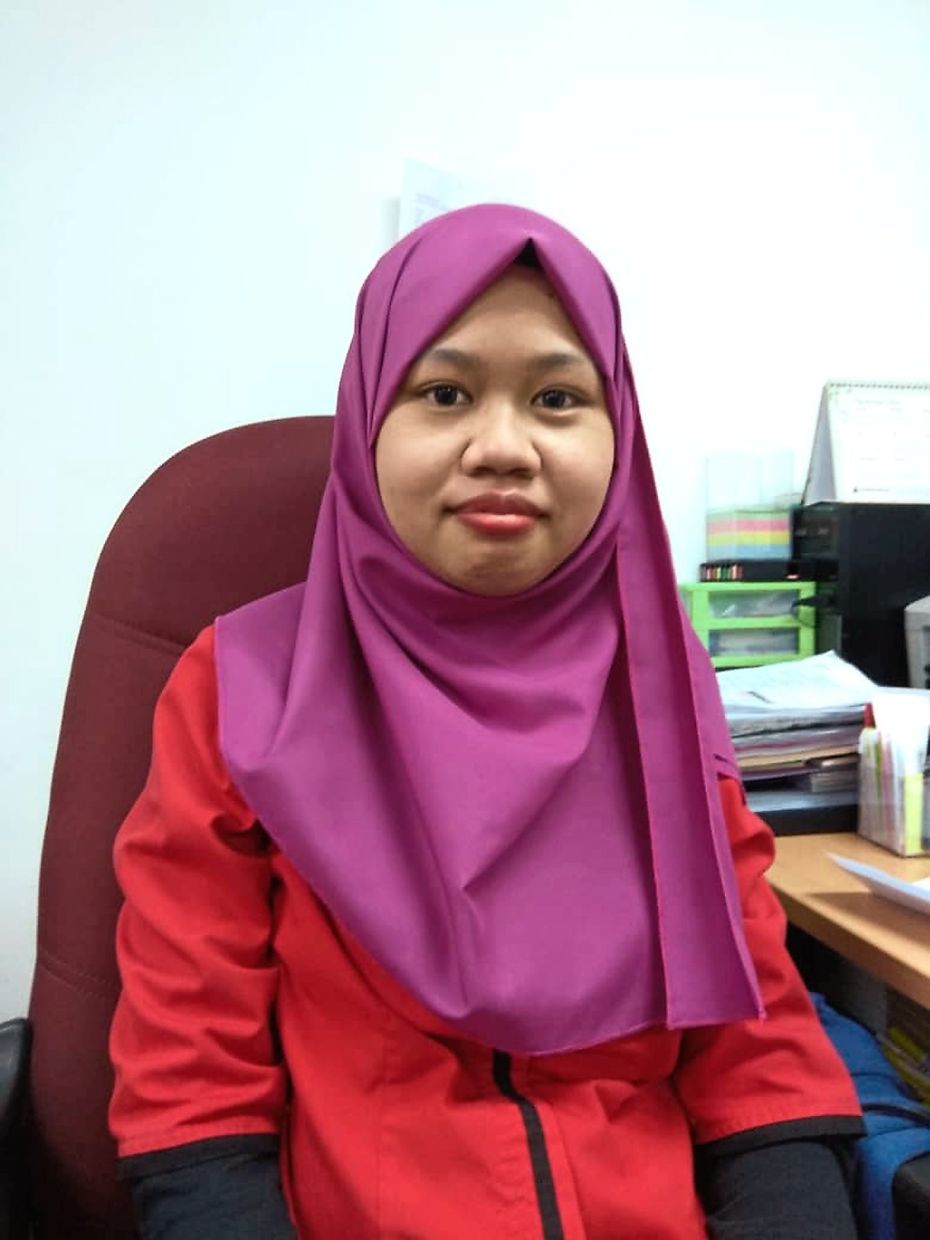 Nupasriulan Selamat: Some of the vehicles left in parking lots in the city might belong to Malaysians working in Singapore.

“And it was hilarious to see MBJB enforcement officers placing a parking ticket on the car windscreen every time they made their rounds, ” he said, adding that such vehicles should have been towed away within days.

Sabapathy, who had served previously as Johor’s traffic police chief, hoped that MBJB would carry out regular patrols and rid Johor Baru of such vehicles which marred the state capital’s image.

He pointed out that there were also cars abandoned in Taman Pelangi where he lived.

“It is not enough to just tow away people’s cars for illegal parking.

“Abandoned cars also need to be removed from our city roads, ” he said.

At the same time, he urged MBJB to create new parking bays along Jalan Syed Mohamed Mufti, near the TJB building.

He said traffic was heavy there and many people visited that area as the EPF and other government buildings were located in the area.

Another Johor Baru resident, who wished to be known only as Wong, complained that a car had been left abandoned for a long time in his residential area in Taman Maju.

“Thieves have stolen all four tyres so the vehicle is now resting on bricks.

“It is an absolute eyesore in our neighbourhood, ” he said.

He added that if the owner did not want the vehicle, then it should have been disposed as scrap metal instead of dumping it in the housing area.

Meanwhile, Nupasriulan Selamat, who works in a private parking lot, speculated that some of the vehicles left at city carparks might belong to Malaysians working in Singapore who were unable to return to collect their vehicles.

“Even in the parking lot where I work, near the Bangunan Sultan Iskandar Customs, Immigration and Quarantine Complex, there are cars that have been left sitting there since our state border with Singapore closed on March 18 last year.”

She, however, said there were vehicle owners who contacted the parking management company and requested that the staff keep an eye on their cars besides asking for regular updates on the vehicles’ condition.

“Some of the owners said they were afraid to return to Johor as they might lose their jobs if they exit Singapore, ” she said.

Nupasriulan suggested that vehicle owners who had left their vehicles in parking lots managed by the city council, to do the same and use MBJB’s mobile application to pay for the daily parking fee or monthly season pass to avoid their cars from being towed away. 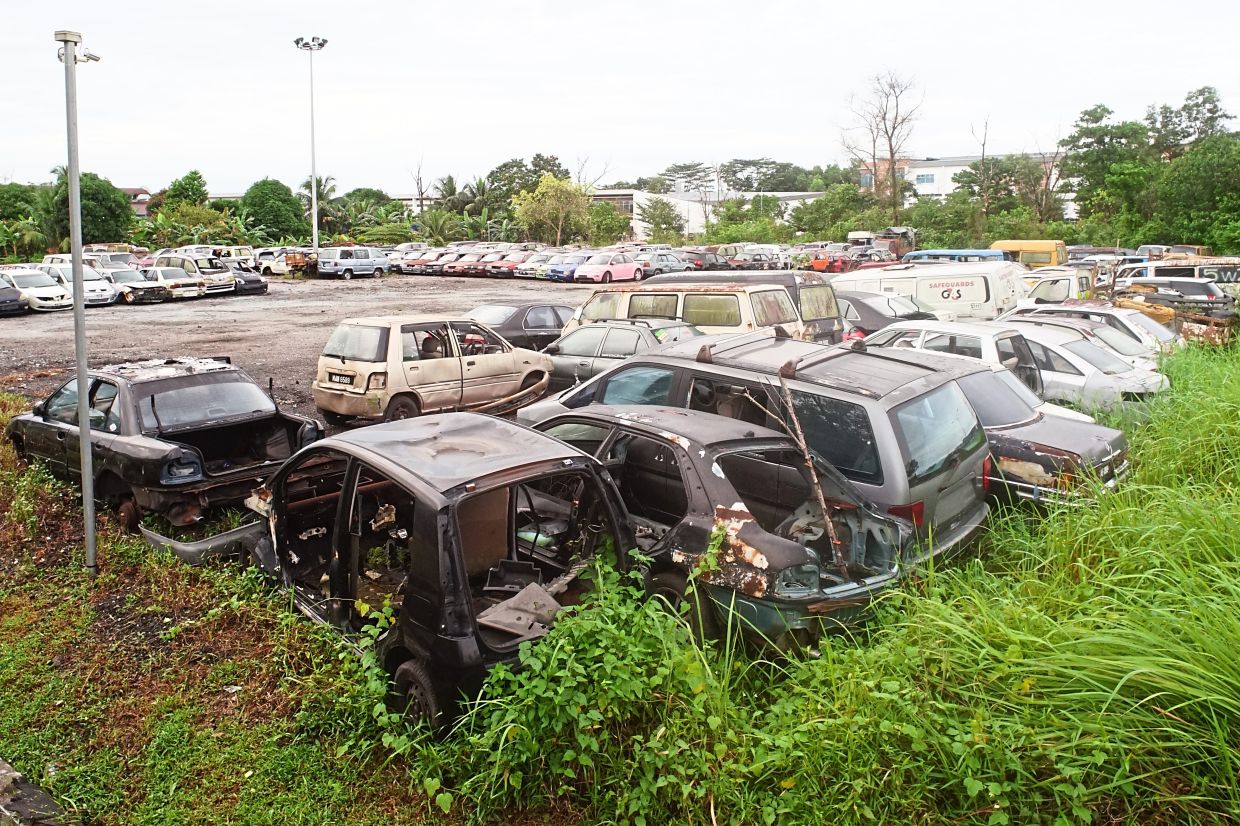 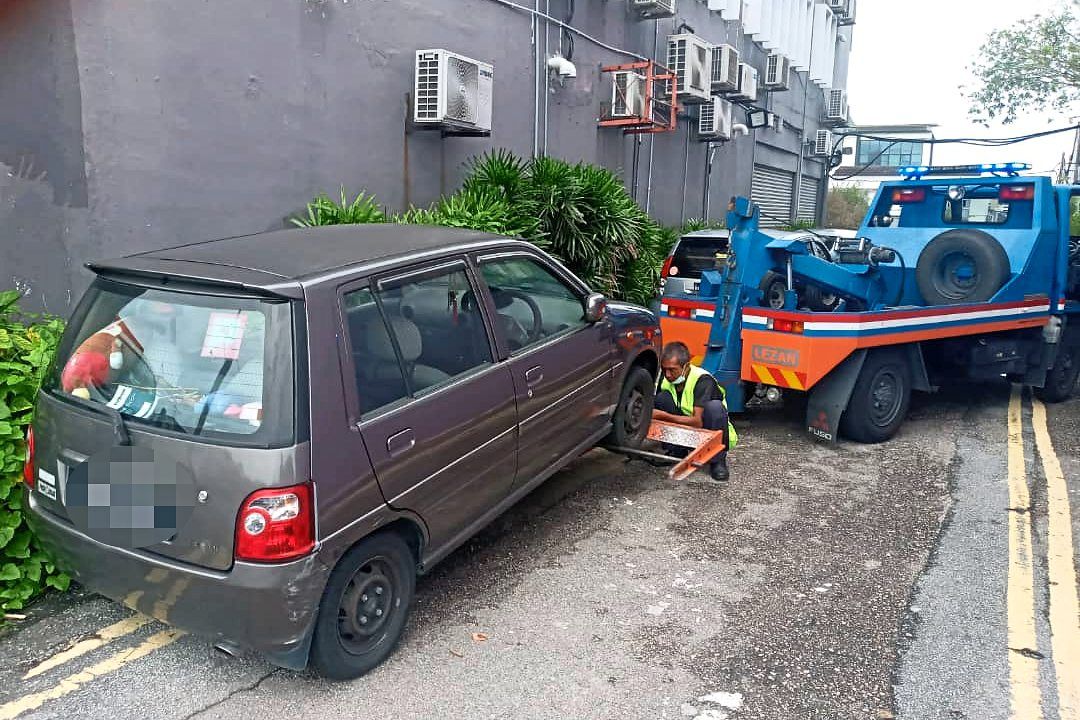 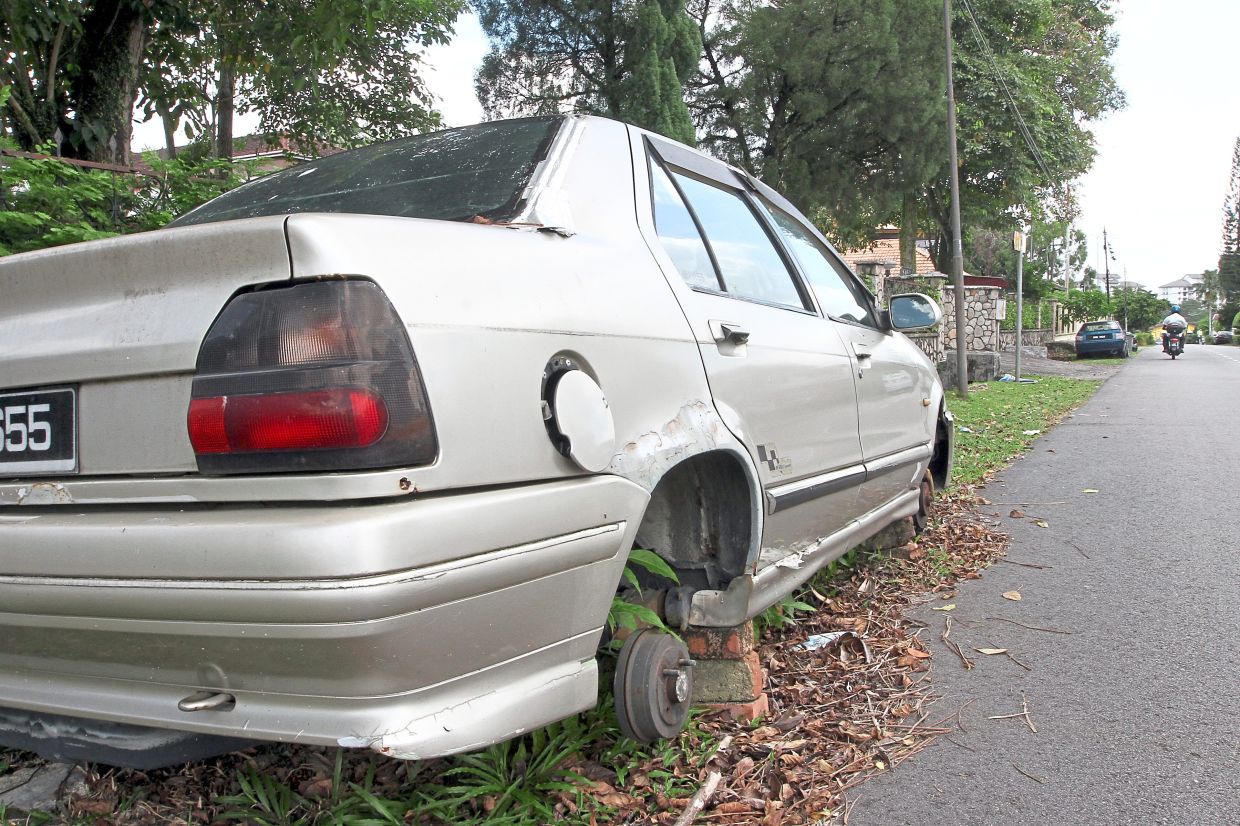 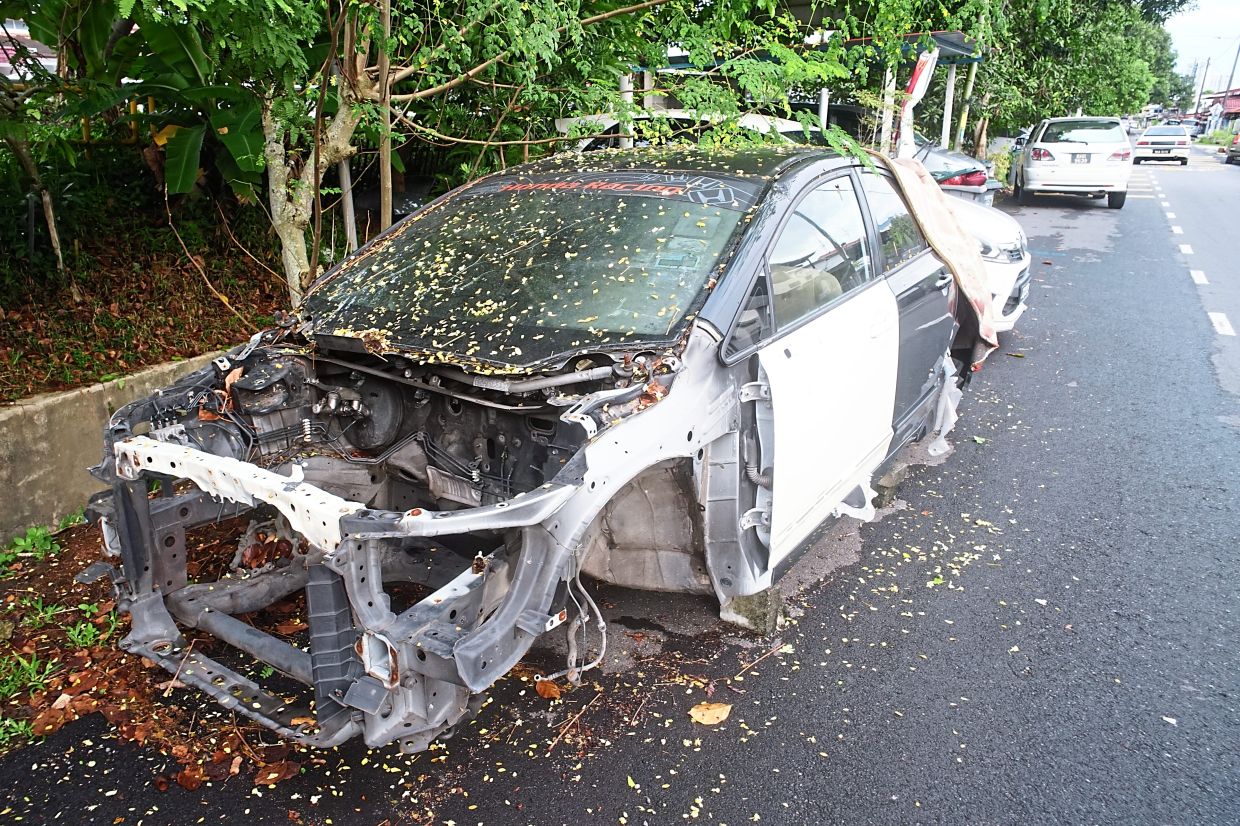 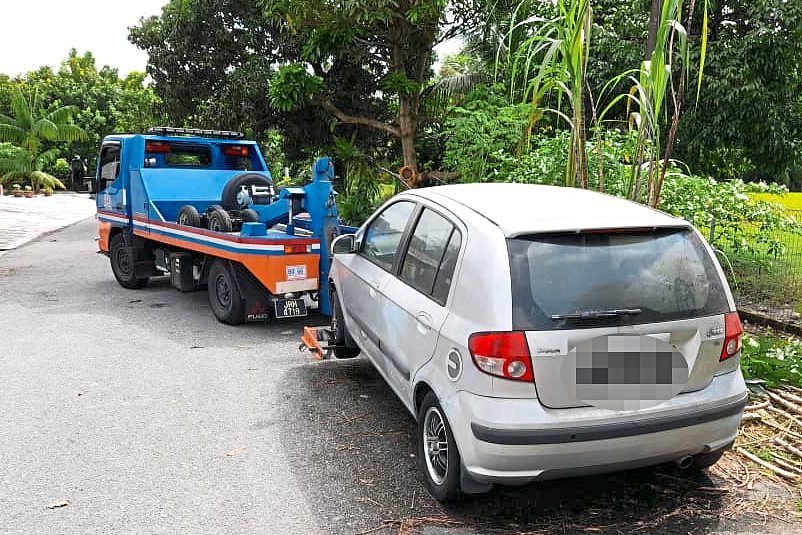 MBJB has a special unit to monitor abandoned vehicles in areas under its jurisdiction. Abandoned cars are often stripped for their parts by thieves.

Taman Pelangi residents complain that cars have been abandoned on their neighbourhood streets.

An abandoned car taking up precious parking space in a commercial centre.

This vacant land in Kampung Orang Asli, Johor Baru seems to have become the go-to place for people to abandon their cars.

MBJB has a special unit to monitor abandoned vehicles in areas under its jurisdiction. An average of three abandoned cars are towed in a day.