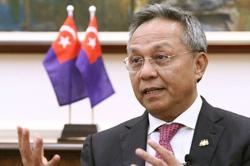 JOHOR BARU: While issues and problems associated with Covid-19 hogged the limelight for most of the year, the southern state had plenty of noteworthy events over the past 12 months.

Among others, Johor saw a change of government and the appointment of the state’s third Mentri Besar since GE14; closure of two land crossings with Singapore; proposed setting up of a Johor Economic, Trade and Cultural Office (Jetco) office in Singapore; and Pasir Gudang being declared a city.

On the economic front, the state government, for the first time in a decade, tabled a deficit budget for 2021.

The Covid-19 pandemic has also resulted in huge losses for the Southern Gateway in terms of tourism spending due to the postponement of Visit Johor 2020 and Malaysia Games (Sukma) 2020.

The year started with the collapse of the Pakatan Harapan government in February after 11 assemblymen from Parti Pribumi Bersatu Malaysia (Bersatu) left the coalition.

This paved the way for Umno to return to power with Datuk Hasni Mohammad being appointed as Mentri Besar — the state’s third since 2018.

During this period, PKR assemblyman Dr Chong Fat Full left his party and become an independent. He was subsequently appointed as state unity, trade and consumer affairs chairman in the new government.

In March, due to the implementation of the movement control order in Malaysia, the Johor Causeway and Second Link bridge were both closed to regular travellers.

The Johor Causeway — once dubbed one of the busiest land crossings in the world with tens of thousands of people commuting daily — now only sees commercial vehicles ferrying goods and supplies to Singapore and a smattering of travellers, mostly on business. The border closure has severely impacted the lives of people as well as businesses in Johor Baru city area, and thousands lost their jobs and sale of non-essential items plummeted.

Subsequently, in May, Hasni announced the formation of Jetco, similar to Singapore’s consul-general office in Johor Baru.

The Jetco office is expected to be set up in 2021 and will be headed by a member of the Johor Civil Service.

Another casualty of the pandemic was the Gemas-Johor Baru double-tracking rail project. In June, Johor Public Works, Infrastructure and Transportation committee chairman Mohd Solihan Badri announced that the project had been delayed by another year due to MCO.

But there was some good news.

On Johor ruler Sultan Ibrahim Ibni Almarhum Sultan Iskandar’s birthday (Nov 22), the RM10bil RTS project was officially started after the idea was mooted more than a decade ago.

The RTS, which is scheduled to be completed in December 2026, will allow over 200,000 commuters to travel between Singapore and Johor Baru daily.

On the same day, Sultan Ibrahim also proclaimed Pasir Gudang as a city, the third in the state after Johor Baru and Iskandar Puteri.

Pasir Gudang was a former fishing village that has now transformed into one of Malaysia’s biggest industrial zones as well as a major contributor to Johor’s growth and progress.

However, the Mentri Besar, who dished out goodies for more than 350,0000 people in the budget, was optimistic that the state would be able to bounce back next year and record economic growth of between 6.6% and 7.6% in 2021.

Though Johor was buffeted by change in 2020, it did its best adapt and position itself to ride the waves of recovery into the new year.