Asman (in yellow) looking at the development plan during his site visit to the Pasir Gudang Hospital project at Bandar Seri Alam in Johor Baru.

JOHOR BARU: Work on the Hospital Pasir Gudang development project is expected to be completed by 2024.

The upcoming hospital, for which construction started in September, will help to reduce the number of patients in Hospital Sultan Ismail (HSI).

He assured that the new facility would be well equipped to meet the needs of the people.

“The six-storey building will have 304 beds, 14 specialists, an outpatient treatment centre, operating theatres, dialysis centre and other facilities.

“It will also have a drive-through pharmacy, 16 labour rooms, nurses’ quarters and about 1,000 parking bays, ” he said when contacted.

“The new hospital is located about 12km from Pasir Gudang city centre and about 17km from Johor Baru city centre.

“We hope this project will provide comprehensive healthcare for the people in Pasir Gudang and the surrounding areas, as well as reduce the number of patients seeking treatment at the nearby HSI, ” said Asman, adding that the project cost about RM375mil.

Johor Ruler Sultan Ibrahim Ibni Almarhum Sultan Iskandar had decreed that there was a need for a new hospital in Pasir Gudang following the chemical pollution incident in Sungai Kim Kim in March last year.

He said that he hoped development of the hospital would start as soon as possible as Johor was among the largest contributors to the Federal Government’s revenue.

“Therefore, it is only appropriate and fair that more allocation for development is given to Johor, especially for the upgrade of healthcare facilities and public transport, ” he said. 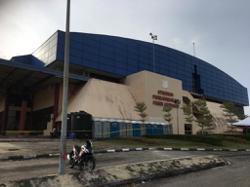