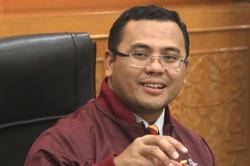 Amirudin (fourth from left) launching the tourism voucher subsidy in Shah Alam. With him are Juliana (third from left), Hee (second from right), Azrul (right) and other guests. — Bernama

TOURISM Selangor has launched a RM2mil tourism voucher subsidy to encourage Malaysians to enjoy the beauty of various attractions and holiday destinations in the state.

The subsidy was activated under the “Nak Bercuti? Pusing Selangor Dulu!” campaign –- initially introduced in June on a digital platform –- during an event in Shah Alam.

The campaign is part of the state government’s measures to help tourism players develop and revive the industry in the wake of Covid-19.

Selangor Mentri Besar Datuk Seri Amirudin Shari, who launched the campaign, said 3,000 frontliners would be chosen to receive RM200 each from the tourism voucher subsidy.

“The Selangor government recognises these frontliners for their continuous commitment and they will be getting these vouchers as a symbol of our appreciation, ” he told reporters at the event.

He said Health Ministry, the police, armed forces and other relevant departments would be contacted to select these frontliners.

The remaining tourism vouchers worth RM1.4mil will be offered to the public to be used for their holidays, including at hotels, theme parks and homestays.

The vouchers must be used to purchase from a list of tourism packages offered on Touch n’ Go E-wallet and Lazada Malaysia, featured via a special micro link for the “Nak Bercuti? Pusing Selangor Dulu! campaign.

The vouchers, available on both platforms from Jan 8 to Jan 31,2021, are in the form of e-wallet cashbacks and e-vouchers totalling RM200 for each successful registrant.

Additionally, 17 tourism packages that have been put together in a collaboration with Tourism Selangor and Malaysian Inbound Tourism Association (Mita) will also be available under the initiative.

Tourism Selangor general manager Azrul Shah Mohamad said the 7,000 vouchers for the public would be offered on a first-come, first-served basis.

Amirudin, in his speech at the launch, shared that 1.55 million tourists had stayed in hotels in Selangor during the first half of the year.

Of the figure, 61.8% were domestic tourists with a majority of them from Kuala Lumpur and Johor, while the rest were foreigners.

He said Selangor had many unique experiences in its nine districts that tourists could explore and the campaign aimed to highlight the different tourism segments available.

Additionally, a RM1,000 one-off incentive has been given to 553 tourism players consisting of tourist guides, homestay coordinators and Selangor Community Hosts, under the Selangor Economic Recovery package.

Juliana said she was proud to be entrusted with the role and would influence her fans to plan their holidays in Selangor.

“There are so many interesting places in the state that are yet to be explored by many. It is so beautiful.

“My love for the state is deep. I have even designed a necklace locket in the shape of the Selangor map. I have visited all districts in the state. It takes time to explore Selangor, ” she added.