Tour bus put to good use in Bandar Saujana Putra

A TOUR bus operator has stepped in to ply the public bus service route at Bandar Saujana Putra in Kuala Langat.

This is music to the ears of many residents, especially those in the B40 group, who have had to fork out extra money for transportation after they were left without public bus service for the past nine months.

Saujana Putra MIC division head Kumaran Subramaniam said previously, Nadiputra had been providing bus service — T706 — from the township to the Putra Heights LRT station from 2017 until the announcement of the movement control order in March.

The service was discontinued due to lack of funding.

Following media reports on the plight of residents, Kumaran received a call from the Transport Ministry asking him to compile data on the number of passengers needing the service.

Despite restrictions imposed by the MCO, Kumaran was able to gather 150 signatures.

A majority of signatures were by residents of Rumah Pangsa Impian and Apartment Impian in Jalan SP4, while 30 others were from passengers who used to use the former bus service.

Mitways Transport and Tours chief executive officer John Mugunthan said the company had approached the ministry after reading about the plight of Bandar Saujana Putra residents.

“The pandemic has brought the tour and travel industry to a standstill.

“So, instead of leaving our fleet of 20 buses idle, we decided to put at least one bus to work first, ” said John.

The company started operating the bus route on Dec 1 after getting the approval of the Land Public Transport Agency (Apad).

“We received the call last month but we could not start immediately as we needed time to prepare the coach in terms of repainting, sanitisation and Puspakom inspection.

“We are on a three-month trial with Apad, which will only issue us a proper permit after that, ” John explained.

Starting from the Saujana Business Park and ending at the Putra Heights LRT station, the current route has 12 stops.

The daily time schedule is from 6am to 9am and 4pm to 7pm, at a frequency of one hour.

However, the service is not available on weekends.

“We are not able to extend operations hours to 10pm following the last train at the Putra Heights LRT station or even run on weekends due to restrictions under the conditional MCO.

“Once this is lifted and when Mahsa University reopens, we will increase frequency of the service, ” said John.

The company has printed posters to raise awareness of the bus service in Bandar Saujana Putra, and will put them up at bus stops by next week.

The printing and installation expenses for this, as well as the regular service and maintenance, will be borne by the company.

One resident who is thankful for the resumption of service is Ganesh Lahmana, who lives near Jalan SP1/2.

“In the past, I used to pay around RM15 from my house to the LRT station. 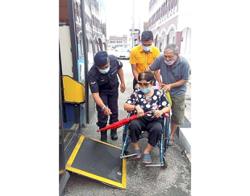 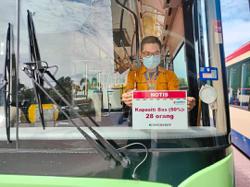