SIBU: A 30m-high monument in honour of local warriors Rosli Dhoby and three nationalists will be built at the Phase 2 site of the town square.

Construction will start in January next year at a cost of RM700,000. The structure is expected to be completed in six months’ time.

Speaking to reporters at the site, Assistant Housing and Public Health Minister Dr Annuar Rapaee said the place was chosen due to its significance in the state’s history.

At the ceremony, a representative from the Land and Survey Department handed over the project to Sibu Municipal Council (SMC) chairman Clarence Ting.

The council planned to open a tender to appoint a contractor to build the monument.

Dr Annuar said Rosli’s last letter, written from prison, would be displayed on the monument.

His nephew had agreed to hand over the letter to the council.

“The design of the monument represents the struggle of the four warriors for independence of the state from colonial rule, ” Dr Annuar added. 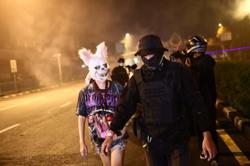