‘Catfish farm may be the culprit’

Operations at several water treatment plants had to be halted after odour pollution was detected at Sungai Selangor.

A catfish farm in Hulu Selangor is believed to be the cause of the latest odour pollution in Sungai Selangor.

State tourism, environment, green technology and Orang Asli affairs committee chairman Hee Loy Sian said water from one of 57 ponds belonging to a fish farm had been released directly into the river.

Selangor Water Management Authority (Luas), together with Hulu Selangor District Council and Pengurusan Air Selangor Sdn Bhd traced the source, and found the odour at the farm was similar to the one detected along the river.

“The owner denied the allegation and claimed that the water from the pond was treated before being released.

“We will investigate under the newly amended Selangor Water Management Authority (Luas) 2020 enactment, which carries a fine of between RM200,000 and RM1mil or a maximum three years’ jail, or both.

“We will also investigate them for the usage of water without Luas’ approval.

“We have lodged a police report so that the police can conduct their own investigations, ” Hee said after visiting the catfish farm yesterday.

He said the owner had a 99-year lease for the 46.1ha land located 8.7km from the Rantau Panjang water treatment plant, but had no business licence.

“We have issued a stop-work order and notice to rehabilitate the area, failing which we may confiscate the land, ” he said, adding that there were between 400 and 600 fish in a pond but not all ponds were being used.

Hee said this was the second time a catfish farm had caused odour pollution in Sungai Selangor.

The first incident happened in February at another farm nearby, which had since been closed.

A Threshold Odour Number (TON) reading of 4 was detected along Sungai Selangor at about 9.50pm on Monday, forcing the closure of four water treatment plants.

The Rantau Panjang plant stopped operations at 11.30pm on the same day, while Phases 1,2 and 3 of the Sungai Selangor plants were halted at 1am on Tuesday.

However, Hee said the plants were only shut for between four and five hours.

“The Rantau Panjang plant resumed operations at 3am yesterday, while Phases 1,2 and 3 of the Sungai Selangor plants followed two hours later.

“There were no water cuts. Only about 20% to 30% of consumers living on higher ground were affected by low water pressure.

“By midnight, water supply should return to normal, ” he said.

Air Selangor’s initial announcement on social media about the stoppage of the four treatment plants operations on Monday night left many people confused as it did not give an indication as to how this would affect water supply of households in the Klang Valley.

Only later did it clarify that there would be limited disruption in some areas, but supply had since resumed. 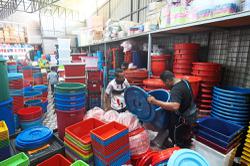