Rajiv provided 30 food packs worth RM2,500 to the needy members of the association.

SCHOOL bus drivers are badly hit with no business for over six months since the movement control order in March.

Some had run out of income and were in dire need of even basic necessities such as food, said Persatuan Bas Sekolah Selangor, Putrajaya dan Kuala Lumpur chairman Haron Mohamad Sidik.

“Some of the vans and buses are going to be seized. The drivers are having it hard because schools are closed and they have lost their main source of income.

“Credit companies are also going after them for their pending payments, ” he said.

On Wednesday, Bukit Gasing assemblyman Rajiv Rishyakaran provided 30 food packs worth RM2,500 to the association, to be distributed to its needy members.

Haron said the association, with help from donors such as the assemblyman, members of Parliament and non-government organisations, would raise funds to buy and distribute food packs to the members every two weeks.

“We are so grateful for Rajiv’s help and hope more will come forward to help our members, at least with food packs until they can get back on their feet, ” he said.

Most of the bus drivers have also shown a willingness to venture into other areas of business.

However, they are asking for microcredit assistance and less pressure from the local council to carry out such activities.

Rajiv urged the bus drivers to apply for business licences from Petaling Jaya City Council so that they could earn some income.

“The council is more relaxed now and they actually allow traders to set up stalls in front of their houses on condition that it does not obstruct traffic flow or cause congestion.

“I would encourage those who are interested to seek more information from the council and apply for these licences, ” said Rajiv after distributing the food packs at Taman Kanagapuram in Petaling Jaya.

Meanwhile, Haron said he welcomed Rajiv’s suggestion for drivers to apply for business licences and set up small businesses.

“Some of the bus drivers want to sell fruits and they need a proper weighing scale. It can cost about RM300 and they are hoping the government will aid them with another RM500 one-off payment.

“Many are thinking of doing microbusinesses, at least until school reopens, ” he said. 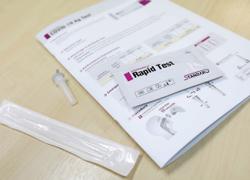