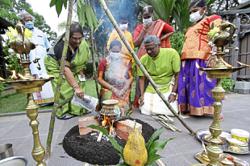 T. Raksshaan, two, lighting up the earthen lamps with the help of his grandparents S. Bala and K. Seetha Devi in conjunction with Karthigai Deepam festival in George Town, Penang.

This year, however, due to the conditional movement control order (MCO), Kanagesvary, 40, decided to have the celebration at home with her family.

This enabled her three boys to have a better understanding of the three-day festival, which started on Sunday this year.

“This year, our Karthigai Deepam festival was more meaningful to us because we had the time to light up 27 oil lamps at our own pace.

“I was also able to fully explain the significance of the festival to my sons.

“I felt I bonded better with my family by celebrating the festival at home this year, and my sons helped me light up the lamps, ” she said.

Karthigai festival falls on the full moon day (Pournami) in the month of Karthigai in the Tamil calendar with Tamils lighting up the earthen lamps in the evening once the sun sets. During the three days of the festival, which comes several weeks after Deepavali, Hindu homes are adorned with the lamps, in honour of Lord Subramaniam.

Early Hindu scriptures also depict that Lord Brahma and Lord Vishnu had a feud on who was more powerful and superior.

Their argument to prove who was better led to a fight and in order to stop the dispute, Lord Shiva, who appeared in the form

of a fire, challenged them to find either the top or bottom of the fire to be deemed as the greatest.

Lord Brahma took the form of a bird and started to fly up to find the top while Lord Vishnu assumed the appearance of a boar and dug deep to find the bottom. Both their efforts proved to be futile, as Lord Shiva, in the form of fire, continued to grow in size.

In the end, both Lord Brahma and Lord Vishnu gave up and admitted Lord Shiva’s supremacy.

The day this ‘incident’ took place was on the full moon day of the Karthigai month.

Kanagesvary said rows of agal vilakku are usually lit in every house as the lighted lamp is considered an auspicious symbol.

“It is done to ward off evil and usher in prosperity and joy, ” she said, adding that she and her family observed a vegetarian diet for the festival.

Arulmigu Sri Bala Thandayuthapani Temple vice-chairman R. Letchumanan said this year, the temple did not light up the 513 steps of the temple because of the conditional MCO.

people to crowd at the temple for the purpose of lighting up the lamps.

“We performed only the necessary prayers for Lord Muruga at the temple from 5pm until 8.30pm, ” he said. Theehvyan (left) and Thiyassree holding earthen lamps while posing in front of a kolam that they helped their mother draw at their home in Penang.

Parking supervisor S. Subash, 32, said he felt comfortable celebrating the festival at home with his family this year.

“Every year, we would go to the temple in Waterfall Road but this time, due to the pandemic, we decided not to.

“However, it turned out to be a good experience for my daughter S. Hemanika as she spent time with us, helping with the lighting of the lamps, ” he said, adding that he and his wife S. Yogeswary, 32, also explained the meaning of the festival to Hemanika.

Teacher G. Logeswari, 39, said she and her family celebrated Karthigai at home as they enjoyed spending time together.

“My children A. Theehvyan and A. Thiyassree helped me with drawing the kolam made of coloured rice and flour and also with lighting the lamps.

“It was truly a different experience for them. We would not be able to enjoy such moments if we had celebrated Karthigai at the temple, ” she said.

Logeswari said it was better to celebrate the festival safely and peacefully at home instead of exposing the family to dangers of the “unseen” virus.