(third, from right, in blue vest ) Lions Clubs International District governor 308 B1 Kenny Low giving a thumbs-up and (fourth, from right) SJK(C) Salak South headmaster David Poon holding one of the many planter boxes with vegetable seedlings that were given away to the residents to be nurtured, in a group photo with other members of the organising team at the community project in Kampung Baru Salak Selatan.

BEGINNING January, some pupils at a Chinese primary school in Kampung Baru Salak Selatan in Kuala Lumpur will be planting vegetables to benefit an orphanage in the vicinity.

This is made possible through a project initiated by the newly established KL Finnamic, a Lions International Speciality Club.

Members of the club have distributed Brazilian spinach seedlings to residents of the new village to nurture the plants before they are handed over to SJK (C) Salak South for replanting once school reopens next year.

The vegetable patch at SJK (C) Salak South will be tended by its pupils who are also residents of the orphanage run by Ti-Ratana Welfare Society Malaysia.

KL Finnamic chartered president Ang Chee Yong said the school management had allowed the club to use land in its compound for the project.

“The children from the orphanage, who are also pupils of the school, would be tasked with caring for the vegetables daily, which they will also harvest for consumption at the home.

“It is a good activity that can become a hobby for the children and is a source of food for them too, ” he said after presenting the vegetable seedlings in planter boxes to residents during the Salak South Blood Donation and Caring Community campaign held at the Kampung Baru Salak Selatan community hall.

Ang said the club, which was under the Lions Clubs International District 308 B1 Region 4, had led all the other 17 clubs under the same umbrella to take part in the project.

Besides the plant giveaway, there were five other activities that were run in conjunction with the campaign, which was jointly organised with the Salak South Federal Village Development and Security Committee.

Among the activities was a blood donation drive, which Ang said received overwhelming response with some 220 people coming forward to donate, although only 136 were found suitable.

“There were also eye and blood sugar level tests that benefitted 74 and 150 residents, respectively.

“In addition to this, we gave away 150 bags of groceries, courtesy of sponsors, to poor families in the community, ” he added. — By VIJENTHI NAIR 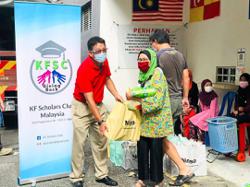