Help for folks the Proper way

A participant checking the condition of chilli plants at a farm in Sungai Tiram, Johor Baru.

JOHOR BARU: A total of 54 low-income earners have managed to increase their income by about 30% through chilli fertigation under the state government’s Johor People’s Economic Development Project (Proper).

The project, run by the Johor Darul Ta’zim Family Development Foundation (YPKDT) under this year’s state budget, aimed to use chilli planting as a way to also increase interest in agriculture and entrepreneurship while supplementing the participants’ income.

YPKDT chief executive officer Nurul Naqiah Fadzil said the participants, aged between 20 and 60 years old, were selected from its database of single mothers as well as from e-Kasih and B40 groups throughout Johor.

“One of our objectives is to let the participants have an alternative source of income to help with their cost of living and also show that farming can be turned into a lucrative career.

“The Proper project kicked off in September in Batu Pahat before moving to the other districts in the state.“So far, the participants have harvested a combined total of 1,360.2kg of chillis amounting to RM21,593.90.

“The participants will then sell their produce directly to suppliers, restaurants and sundry shops. This has helped supplement their income by 30% compared to their original income, ” Nurul Naqiah said in an interview.

She added that some participants who were housewives with zero income were able to generate some money through this project.

The participants also included youths from low-income and single-parent families.

The involvement of youths in the project could inspire others to explore the farming sector and their physical strength, contribution of fresh ideas and social media skills could further enhance the programme as a whole, she said.

Under Proper, an appointed consultant would train and guide the participants throughout the first season of the programme, that is spread out across five months with six cycles.

They would then be allowed to continue on their own for the following season, with YPKDT checking on them from time-to-time.

Nurul Naqiah said the participants were also taught financial management to ensure a sustainable harvest, while taking into consideration the various operational costs, utility bills and savings for the next cycle of crops.

“Farming projects where they have their own food production are one of the ways we can help to alleviate the people’s cost of living.

“We will provide theory and practical training to help them manage their crops better.

“By integrating farming into our social development plans, we aim to help the participants become more financially independent and have a sustainable income rather than just giving them financial aid, ” she added.

Nurul Naqiah said the project faced some challenges, such as the lack of fertigation knowledge among the participants, pest control and having to deal with the unpredictable weather conditions.

“However, the participants are quite committed and have taken their own initiative to work with the project consultant on ways to overcome the challenges.

“The participants also took steps to replace damaged seedlings with new ones and monitor their crops daily to ensure that they are in good condition to prevent diseases from damaging the whole batch of crops, ” she added.

Other than benefitting the participants, the project also utilised empty or abandoned plots of land to ensure food security, she said. A participant checking the condition of chilli plants at a farm in Sungai Tiram, Johor Baru.

The Johor People’s Economic Development Project has managed to generate income for the participants.

The participants have harvested a combined total of 1,360.2kg of chillis so far under the project. 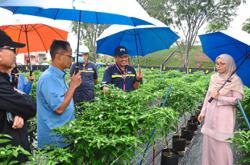