A BRIDGE is defined as a structure that spans and provides passage over a physical obstacle, such as a river or road.

A bridge, or jambatan as it is known in Bahasa Malaysia, can be as simple as several pieces of wood nailed together to cross a drain or an engineering feat with standout designs stretching across straits or valley.

PICTORIAL: The Bridges of Putrajaya

Over the years and decades, some bridges have become landmarks of their own, with visitors flocking to a site just to get a photo of the iconic structure.

They are also a significant part of Putrajaya’s attraction.

It is – unsurprisingly – dubbed the “City of Bridges”, given that there are numerous bridges linking its main administrative island to the commercial, residential and other parts of the federal administrative capital.StarMetro takes a look at 10 bridges in the Klang Valley, with a special mention of two iconic bridges in peninsular Malaysia. 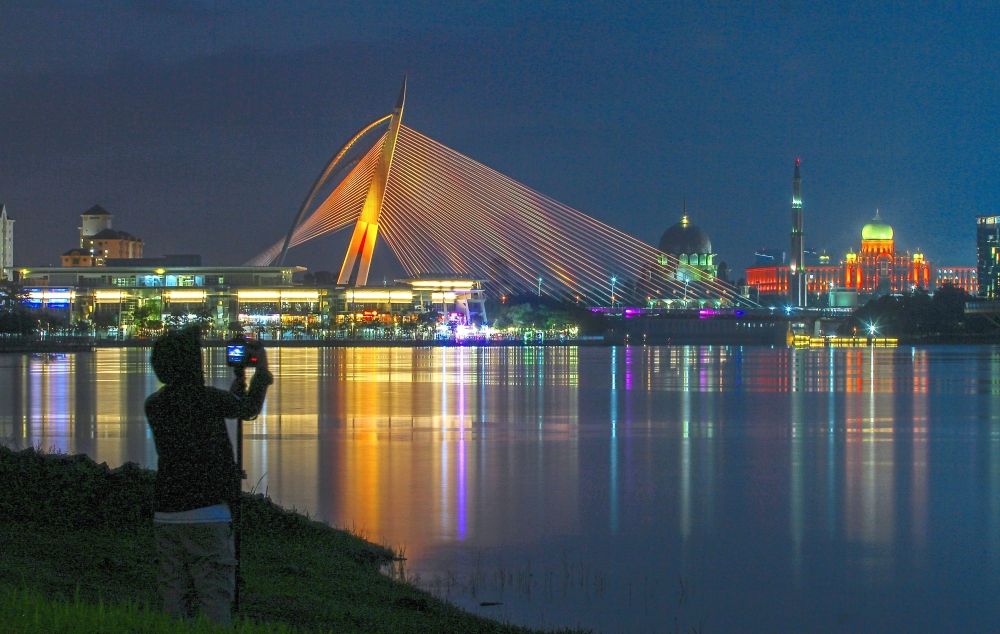 Many recognise the Seri Wawasan Bridge because of the distinctive futuristic design of this bridge, made from a combination of cable backstays and structural steel tie back. It is a popular spot for photography, given that its unique design sweeps across the Putrajaya skyline like a sailboat in full flight. Measuring 240m in length with a 168.5m-long main span, this bridge links Precinct 2 of Putrajaya’s administrative centre and the Precinct 8 residential area. It also has a dedicated walkway and bicycle track on each side of its three-lane carriageway. 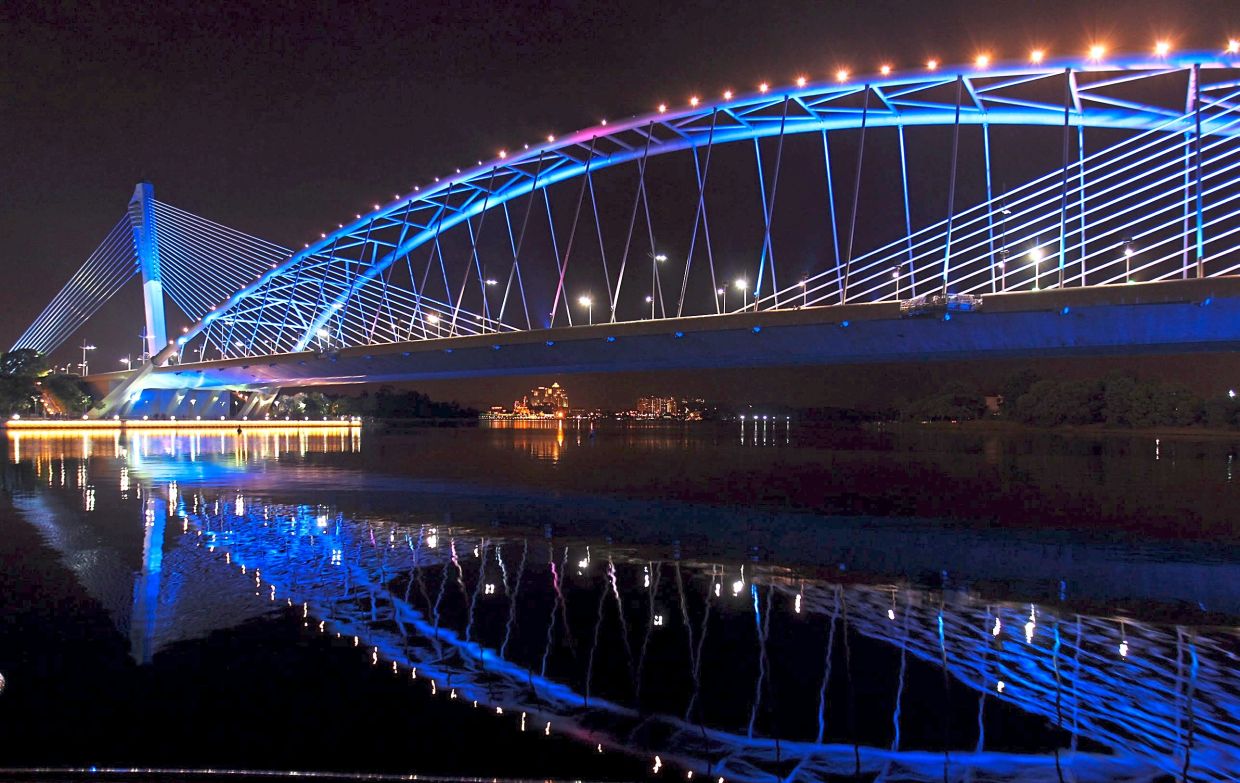 Depending on how you look at it, Seri Saujana Bridge’s design can be described as resembling the famous Sydney Harbour Bridge or a giant harp. It features a combination of cable-stayed and arch structure in an elegant, futuristic design. The bridge has an overall single span of 300m. It links Precinct 4, near Anjung Floria and the China-Malaysia Friendship Garden, to Precinct 7 and the highways to Kuala Lumpur and Kuala Lumpur International Airport. This is the main bridge that takes visitors to some of Putrajaya’s most iconic buildings, namely Putra Mosque (also known as the Pink Mosque) and the Prime Minister’s Office. Its architecture was inspired by the famous Khaju Bridge in Isfahan, Iran. The unique three-deck bridge with a 435m span is designed to provide vehicular, rail and pedestrian access. The upper level of the bridge forms part of Persiaran Perdana. It links users to key government agencies such as the National Security Council and Economic Planning Unit in Precinct 1 as well as Finance Ministry, Foreign Affairs Ministry, National Registration Department, Immigration Department and Palace of Justice in Precincts 2 and 3. 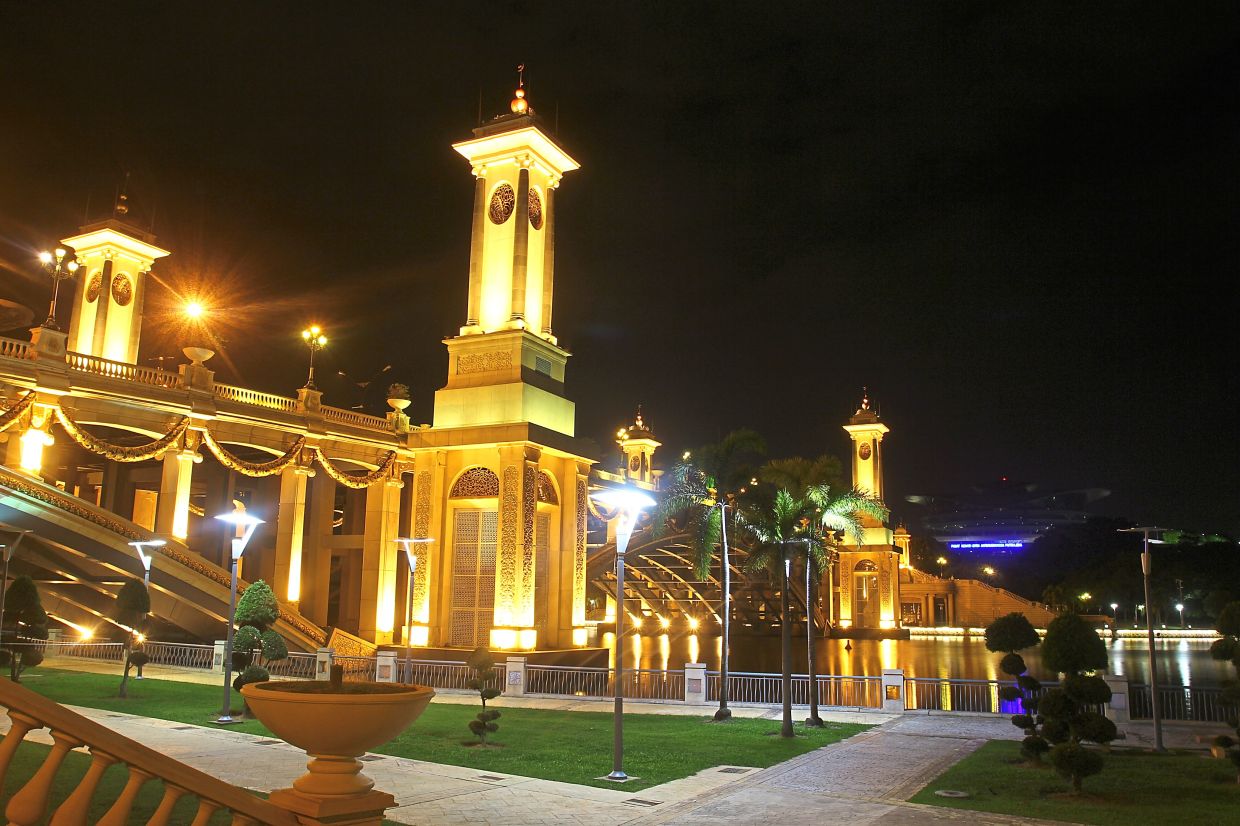 Categorised as a ceremonial bridge, the Seri Gemilang Bridge serves as the main entrance to Putrajaya’s main administrative island from the south. It also connects Precinct 4 to the Putrajaya International Convention Centre as well as Precincts 5 and 6. The main span of the deck arch bridge is 120m long with two 60m spans at each end, making it a total of 240m in length. Some of its features include balusters fabricated from precast stone, specially designed lamp parts and distinct towers. 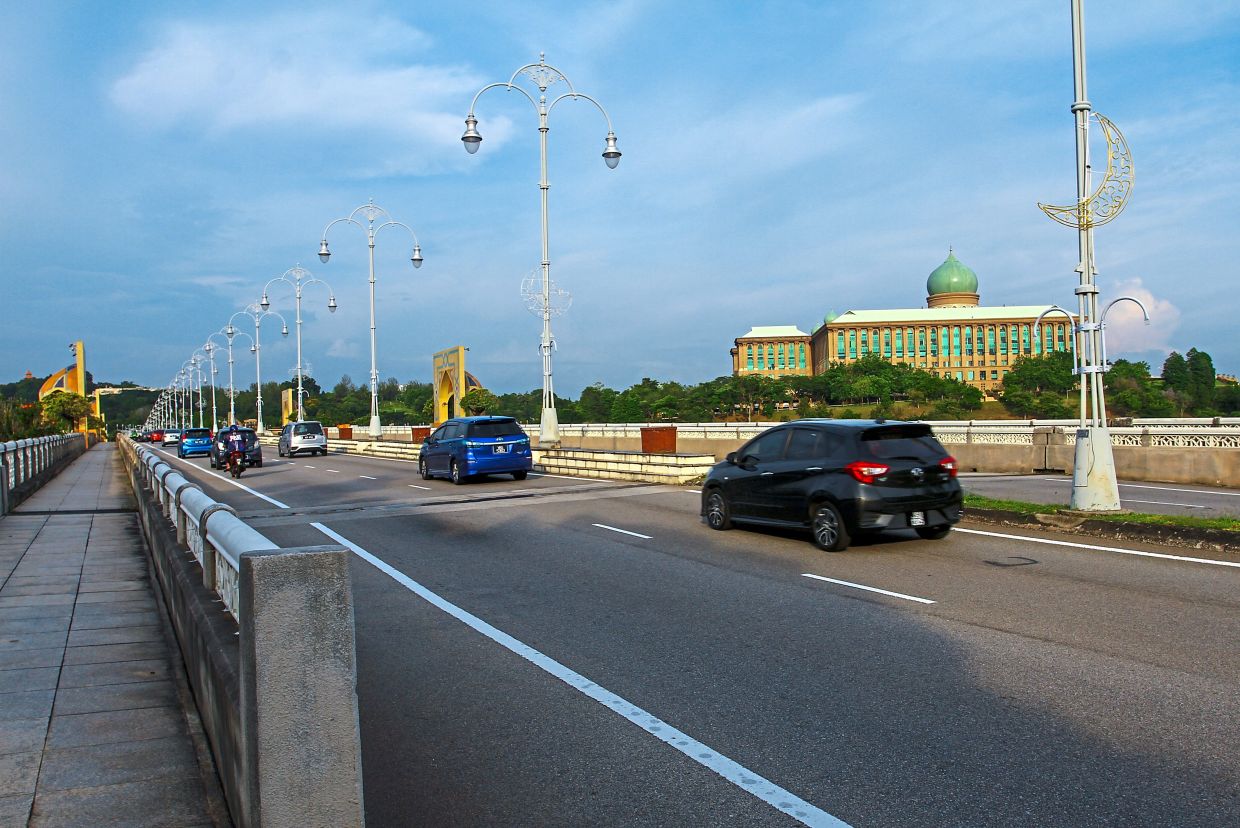 Seri Perdana Bridge is 370m long and built across the Putrajaya Lake. The box girder structure is made up of seven central spans of 75m and two end spans of 55m. The bridge features Islamic designs and eight rest areas for visitors to enjoy scenic views of the lake as well as surrounding landmarks, such as the Prime Minister’s Office, Putra Mosque and Seri Perdana Complex which is the Prime Minister’s official residence. 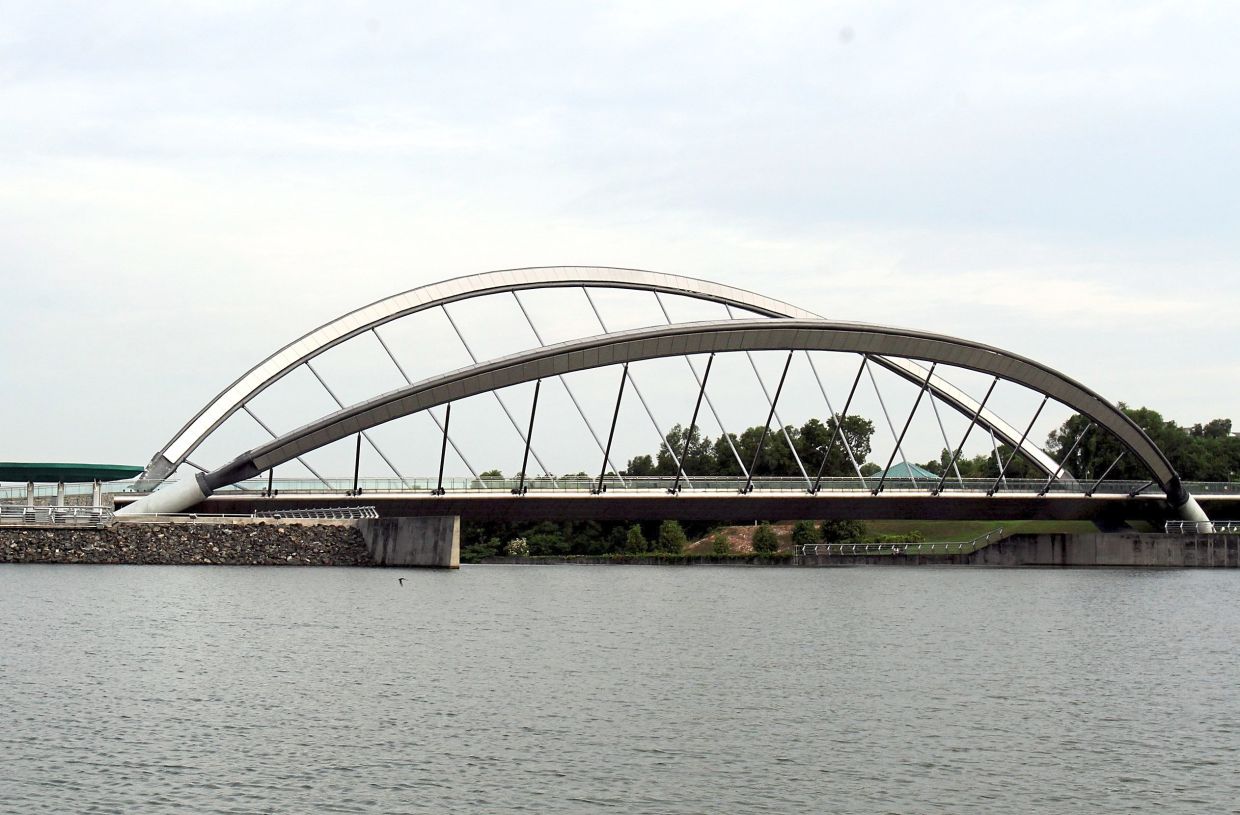 Accessible via Taman Seri Empangan, Seri Empangan Bridge’s name is a giveaway to its location and the view it offers. The 135m-long structure with a curved deck is sometimes known as the Butterfly Bridge, owing to the design of its arches that resemble a butterfly’s wings. The double asymmetrical tubular arch bridge gives pedestrians and cyclists a scenic view of Putrajaya Lake and the buildings across the lake located along Precinct 4. 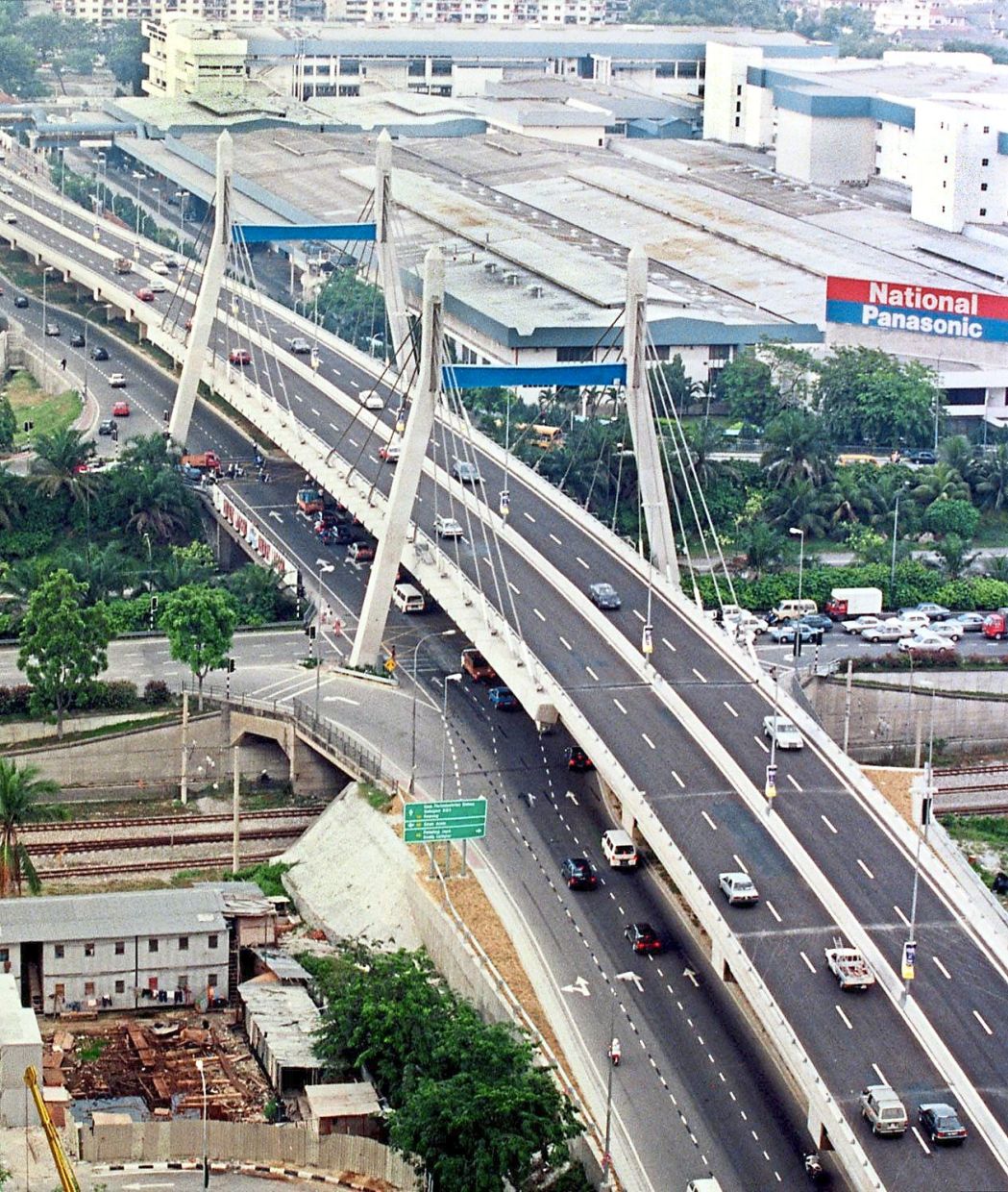 This structure is affectionately called Motorola Bridge because it is located next to the then Motorola factory in Sungai Way, Petaling Jaya. The building has since been taken over by Freescale Semiconductor Malaysia. Lingkaran Trans Kota Sdn Bhd (Litrak), the concessionaire of Damansara-Puchong Expressway (LDP), built the cable-stayed bridge to connect Kelana Jaya and Petaling Jaya to Bandar Sunway and Puchong. According to Litrak, it was built as a “third-level bridge” over the existing bridge at the Motorola Interchange, where the LDP and Federal Highway intersect. — Filepic 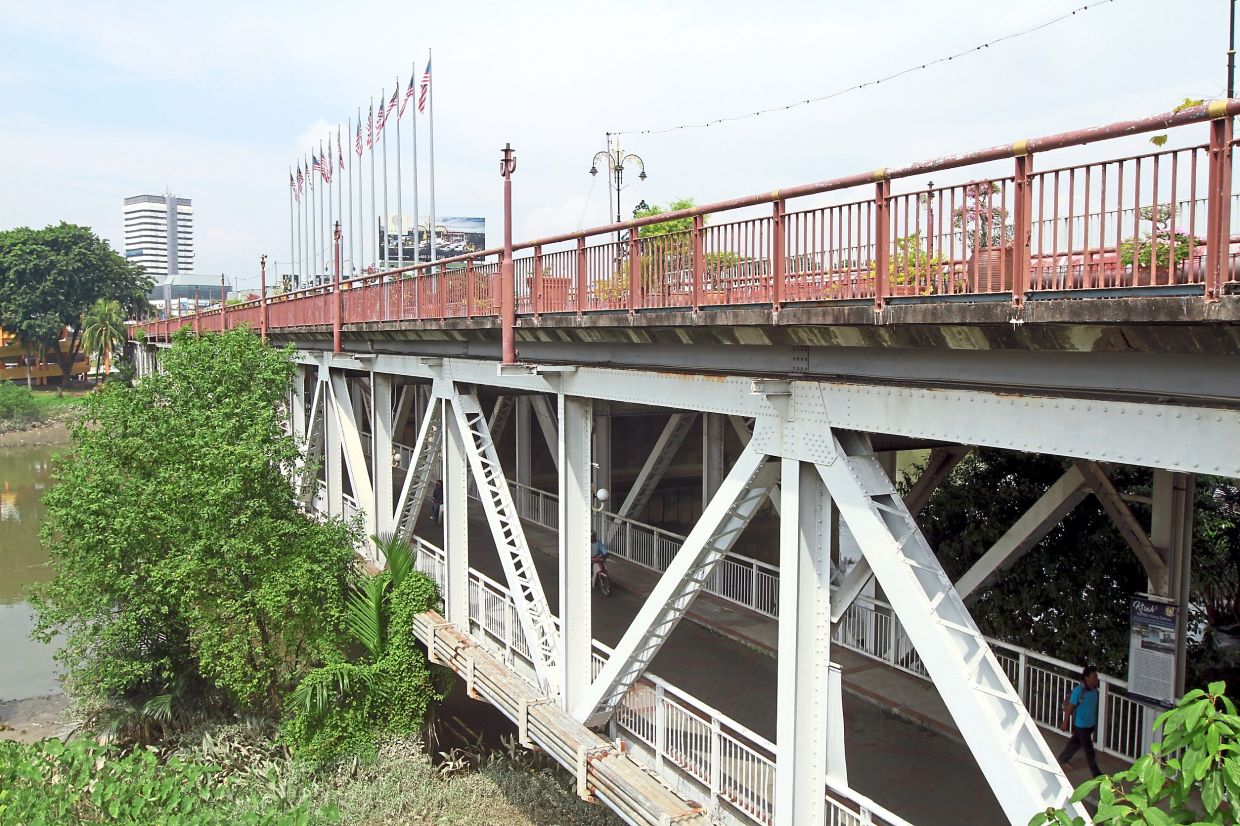 Kota Bridge in Klang was the first double-decker bridge to be built in Peninsular Malaysia and South-East Asia – in 1957. It was constructed at a cost of RM7mil at that time by British company Dorman Long, which had also built the famous Sydney Harbour Bridge. Kota Bridge’s 457m length spans Sungai Klang. The longer upper deck was built for motorised vehicle traffic, while the shorter lower deck was for pedestrians, bicycles and trishaws. It connected Jalan Pasar in northern Klang to Pengkalan Batu in southern Klang, but the bridge was also important to the country’s economy as it connected Kuala Lumpur to Port Swettenham, now known as Port Klang. The old Kota Bridge was closed to motorised traffic in 1992 when the new – with the same name – next to it became operational.

9 - Other bridges in Putrajaya

The Seri Bakti Bridge connects the main administrative island in the north to Precinct 16 in the south. The 270m-long structure also links the secondary road to Seri Satria, which is the Deputy Prime Minister’s official residence. Rounding up the list of bridges in Putrajaya are Seri Setia Bridge and Seri Bestari Bridge. Unlike the earlier structures mentioned above, these three bridges feature more conventional and practical designs.

Raja Muda Nala Bridge is also known as Klang’s Third Bridge as it is the third such structure to link the royal town’s north to its south, after Kota Bridge and Musaeddin (Tengku Kelana) Bridge. Built at a cost of RM199mil by the Selangor government, Raja Muda Nala Bridge links the northern and southern parts of Klang through Jalan Goh Hock Huat and Jalan Sungai Bertih. The structure with a balanced cantilever box girder design is 2.5km long, with 1.2km of it crossing over Sungai Klang. Officially opened by Sultan of Selangor Sultan Sharafuddin Idris Shah, the bridge was named after Raja Muda Nala, the oldest son of the first Sultan of Selangor, Sultan Sallehuddin Shah. 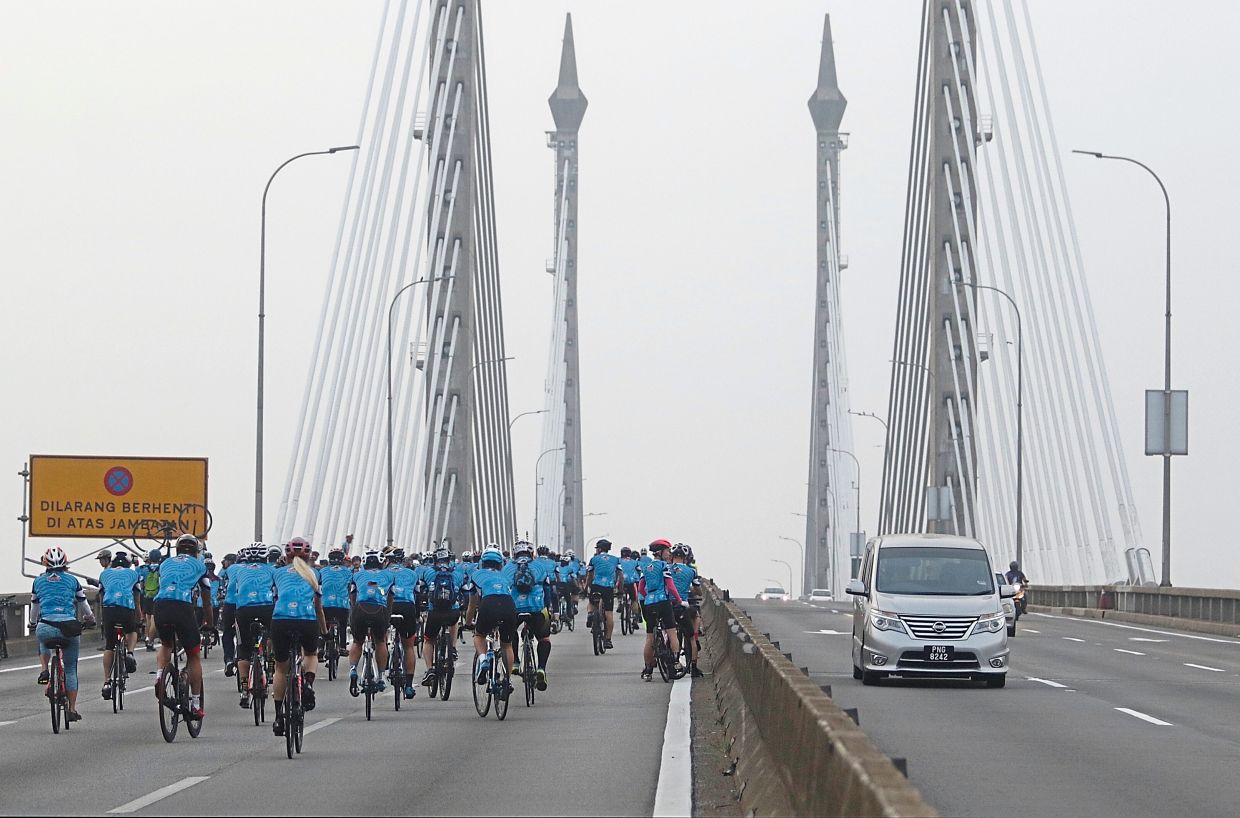 The Penang Bridge is a sight that greets many motorists and visitors to the island up north. The 13.5km bridge connects Seberang Prai on the mainland to Gelugor on the island across the Penang Strait. The tolled bridge was the only road connection between the mainland and island, until the Sultan Abdul Halim Muadzam Shah Bridge or Penang’s Second Bridge came along. The only time it is closed is for the annual Penang Bridge International Marathon. 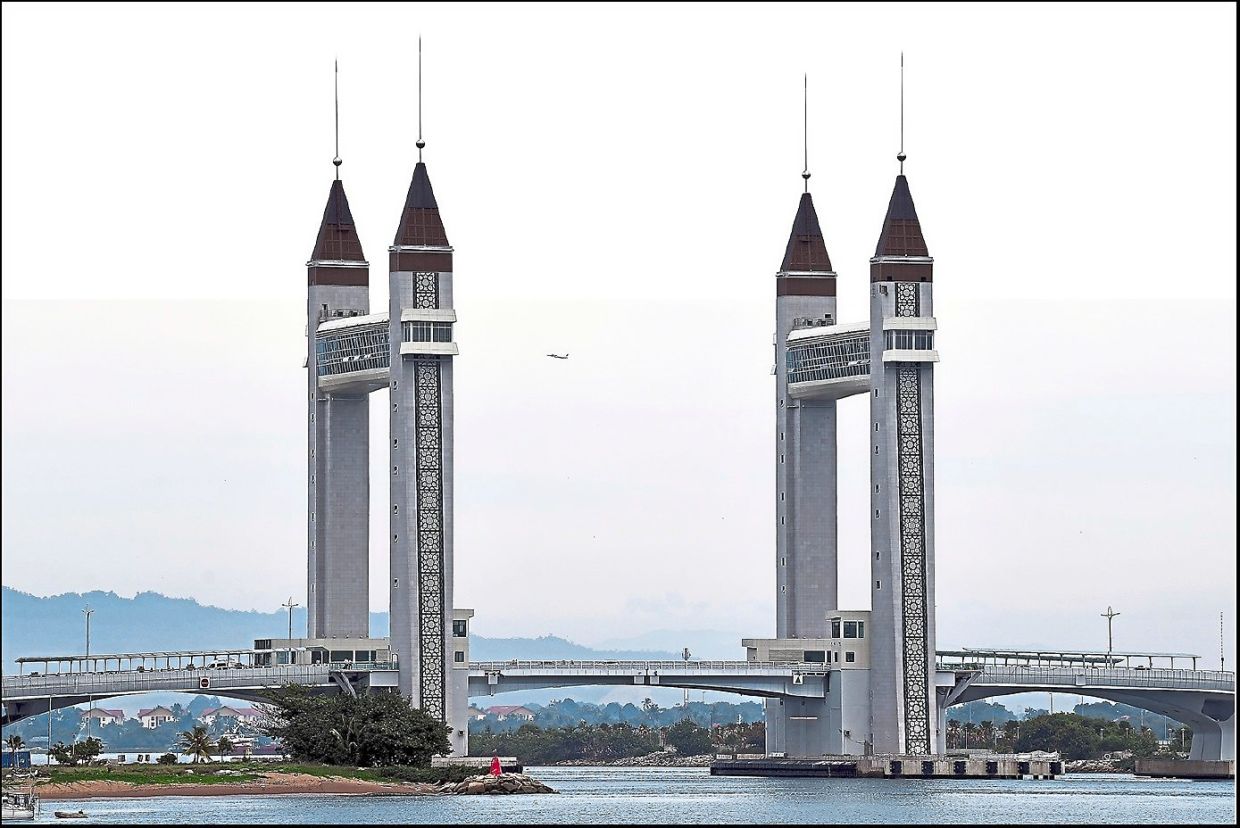 The 638m-long Kuala Terengganu Drawbridge is an eye-catching structure, which makes it a new tourist spot in Terengganu’s royal and administrative capital. The RM248mil drawbridge is the fourth bridge connecting Kuala Terengganu and Kuala Nerus. The other three are Sultan Mahmud Bridge, Pulau Rusa Bridge and Pulau Sekati Bridge. Touted as South-East Asia’s first tower drawbridge, its 76m bascule (moveable component) is the longest ever built on a tower bridge. The drawbridge, inspired by the London Tower Bridge in England, was opened to traffic last year and can be raised for ships to pass through.