RESIDENTS at Mewah Court Apartments in Jelutong, Penang, rejoiced as their application for state funds to replace their water tanks has been approved. “This project is one of the largest approved this year. To replace 16 water tanks in two blocks will cost RM468,000.

Under the state’s Housing Maintenance Maximum 80% Fund (TPM80PP), the management committee (MC) would have to fork out 20% of the project cost to qualify for the 80% state subsidy.

“The project will begin when the payment is done and is expected to be completed in eight weeks, ” he said at a press conference at Mewah Court Apartments in Jelutong on Tuesday.

“Under TPM80PP, the state government has spent RM38.2mil covering 411 projects that have already been executed, approved and paid off, ” he said.

Mewah Court Apartments MC chairman Emmanuel Dorai said he is thankful the project has been approved.

“Our water tanks have been used for almost 30 years already. Water is life and we need clean water to survive. We are ready to pay RM93,600, ” he said.

On a separate matter, Jagdeep said Covid-19 standard operating procedure (SOP) compliance checks had been carried out at many high-rise buildings in the state.

“We have 1,881 high-rise schemes in Penang and we have conducted checks on more than 1,400 buildings.

“High-rise buildings have a large concentration of residents and checks have to be done to ensure that the SOP is adhered to. 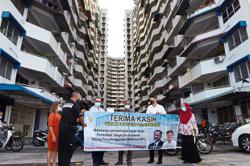