JOHOR BARU: Johor has suggested for an early implementation of the third border opening scheme between Malaysia and Singapore, the Daily Commuting Arrangement (DCA), with priority given to the education sector.

“I have suggested to the Prime Minister that we can start DCA with the education sector first that involves college or private institution students in Johor or Johoreans who study in Singapore, apart from their parents, guardians or teachers who should also be given priority.

“This is because there is an urgent request by those who commute back-and-forth on a daily basis, ” he said at an online press conference here.

Hasni said the current DCA implementation has yet to be decided by the Government but the state government had presented a comprehensive standard operating procedure (SOP) regarding the implementation of the scheme to the NSC.

He said this included a proposal that only about 7,000 individuals be allowed to commute in the early stages of the DCA implementation.

He added that the suggestion from the state government also included a 10-day interval between each batch of individuals travelling under the DCA.

“For the initial phase, we suggested that 7,000 persons be allowed to travel through the travel scheme for 10 days after taking Covid-19 tests.

“We will then issue travel passes for another 7,000 people under the scheme for another 10 days, ” he said.

He added that Johor has the capacity to conduct some 30,000 Covid-19 tests and that the labs in the state were prepared to handle the numbers.

“All our proposals have been presented to a special committee at the Federal level and based on the Prime Minister’s response, the NSC or the committee will discuss the matter and will inform the Foreign Ministry for further action.

On the meeting with the Johor Digital Council, Hasni said the council would come out with its blueprint for the digital development of the state, which is expected to be completed in the next three to four months.

“This is the first meeting and we have agreed that in the next few months we will come up with a blueprint for the digital economy of Johor. It is a new area that could bring in new revenue for the state, ” he said.

He added that the state is also looking into making it mandatory for developers to provide communication infrastructure for new projects that are to be developed in the state.

“We will study this matter in the next few years as we see this as a way to improve the communication infrastructure in Johor, ” he said. 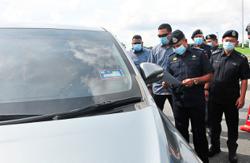