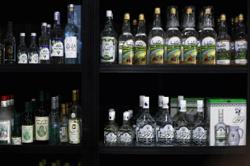 A group of foreigners sit under a bridge in Brickfields purchased from a sundry shop in the area.

BUSINESS owners and residents associations want Kuala Lumpur City Hall (DBKL) and the Federal Territories Ministry to adopt a selective approach instead of a blanket ruling in implementing the new regulations on the sale of hard liquor.

KK Group of Companies founder and group executive chairman Datuk Seri Dr KK Chai urged DBKL to consider the plight of business operators who had suffered losses due to the ailing economy brought on by the Covid-19 pandemic.

Chai said the authorities should look at the bigger picture.

“DBKL should control the sale of liquor in Muslim-majority communities, not implement a blanket ban at all convenience shops in the city.

“What is the point of controlling the sale of liquor in non-Muslim areas, especially in the city centre where there is a big market for the tourism sector.

“We will support the ban 100% if the authorities target convenience stores in Muslim-majority neighbourhoods, ” he said.

Chai added that currently, convenience stores like KK Supermart which were licensed to sell liquor, were not allowed to operate near schools, places of worship, hospitals and police stations.

“DBKL needs to address the repercussions of its decision as at least 25% to 30% businesses have already closed down in main commercial areas in the city.”

Chai said that its stores in Kuala Lumpur were currently suffering losses due to the shorter business hours because of the conditional movement control order.

There are more than 150 KK Supermart stores in Kuala Lumpur.

“Kuala Lumpur is the capital city and a tourism hub.

“We also have many foreign communities residing here.

“Our target customers in areas like Bukit Bintang are foreigners who come from all over the world.

“It is their culture to enjoy liquor, ’’ he said, adding that in some areas the tourist and expatriate segment comprised almost 40% to 50% of its customers base.

Bukit Bandaraya Residents Association Adviser Datuk Mumtaz Ali stressed that the ban should not just include Muslim-majority neighbourhoods but also residential areas with schools and parks in the vicinity.

“We had a problem several years ago with a convenience store selling liquor in Jalan Bangkung, Bangsar.

“The store was near a primary school and there was a park nearby.

“We had incidents of people consuming alcohol purchased from the store, sitting in the park all night and also sleeping there.

“We fought to get that store to stop selling alcohol as it was disrupting peace in the area, ” Ali said.

also Brickfields Rukun Tetangga chairperson, agreed that banning the sale of liquor should be confined to residential and Muslim-majority areas.

“The authorities should also restrict the number of stores selling liquor in a particular area.

He said DBKL should discuss the matter with stakeholders before implementing any ruling.

“We don’t need 20 shops in one neighbourhood selling liquor.

“Brickfields is a mixed neighbourhood, with a high percentage of residents being expatriates.

Naidu said the biggest problem with the availability of cheap liquor was that it was sold everywhere, thus adding to the problem of alcohol abuse.

Last week, DBKL announced a ban on the sale of hard liquor in convenience stores, sundry shops and Chinese medicine halls in Kuala Lumpur from Oct 1 next year.

The DBKL guideline outlined that businesses selling hard liquor could not be located in front of police stations, places of worship, schools and hospitals.

However, the ban will not affect pure or mixed liquor products in traditional medicine.

The ban also does not include beer, which can be sold at these premises from 7am to 9pm, but must be placed separately from other beverages. 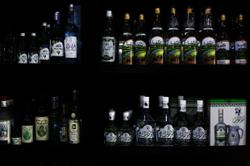