“The new ruling does not state clearly what types of liquor cannot be sold. It only says that it is permitted for Chinese medicine, ’’ he said.

“The authorities should be going after the shops that sell the cheap illegal liquor, the counterfeit versions that have killed more people than drink-driving.

“The sale of counterfeit liquor is big in Malaysia, which is made by unlicensed distilleries.

“This type of liquor, repackaged with the label from a well-known brand is widely available in sundry shops in the city, ” he said.

Marshel said these types of shops usually operated on upper levels of commercial areas and were sometimes manned by foreigners.

“The liquor bottles do not have the Customs duty sticker on them to indicate that taxes have been paid. These are the people the authorities should be targeting, the tax dodgers, ” he said.

As for licensed manufacturers of liquor, he suggested that the authorities set a minimum price for the alcohol so that it could not be sold cheaply.

“We don’t want to encourage binge drinking, a higher price tag will discourage that.

“The government must be clear about the reasons for doing this.

“This is not about politics or religion or culture. This is a health, social and community issue.

“We are not against the sale of alcohol, but we are concerned about the easy availability of illegal cheap liquor at some of these stores.

“I have seen enough deaths and families break up because of liquor consumption within the B40 group, but we need a proper plan to tackle this, ” said Marshel.

StarMetro had previously reported on a study by MACLM on liquor consumption which revealed that Kuala Lumpur tops the list with the highest number of shops selling compounded hard liquor in the country.

Following close behind are Klang in Selangor, Sungai Petani and Kulim in Kedah and Seberang Prai, Penang.

The data was based on five years of research and surveys carried out by its members, who had been monitoring outlets selling hard liquor nationwide.

The study was carried out in 35 local authorities nationwide.

Researchers looked at factors like the number of liquor shops in a residential area, access to the shop, random purchase surveys, sending in very young-looking buyers to purchase liquor and even talking to illegal manufacturers.

“During the movement control order period, our members reported an increase in domestic violence cases which could have been caused by people consuming liquor because of financial difficulties, ’’ said Marshel.

He called on the government to invest in research on factors that contributed to alcohol dependency and the impact of the drink on society, especially youth. 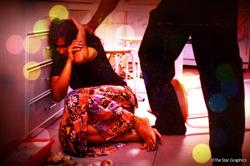