In tabling a RM795.47mil budget for next year’s management expenditure and RM201.92mil for development, he said the budget would focus on the comfort and well-being of the people through increased development expenditure.

Overall, the estimated development expenditure for the year 2021 had increased by RM81.17mil or 67% compared to 2020, he added.

He also said the state government would always emphasise the balance between the economic situation and the well-being of the people in line with the taglines “Maju Terus Pahang” and “Pahang 1st”.

“At the same time, the focus is not only on economic growth but also to give priority to the state government’s ability to ensure that the people can maintain their income and continue their lives in our country that has been affected by Covid-19, ” he told the state assembly.

To achieve this, Wan Rosdy said the state’s 2021 budget would focus on three main strategies — boosting the economy towards an independent state, empowering services and human capital and improving people’s lives.

“The state government is always thinking of the best way to help the people, especially those affected by this pandemic.

“As such, the state government agrees to channel a surplus revenue amount of RM5mil to the Pahang state disaster trust account, to be used for the purpose of controlling the pandemic and also to help those affected by Covid-19, ” said the Mentri Besar.

He also expressed gratitude for the contributions made voluntarily by 4,589 Pahang civil servants through salary deductions from April to September this year, amounting to RM573,000.

“During November, December 2020 and January 2021, all members of the state executive council have agreed to take a basic salary deduction of 10% to be contributed to the Pahang state disaster trust account.

“I also call on all assemblymen, including the Opposition, to deduct 10% of their basic salary to be channelled to the trust account as well, ” he said.

On Pahang’s current financial condition, Wan Rosdy said the state government managed to collect RM730.26mil in revenue as of Nov 13 compared to the set target of RM744mil, which meant an achievement of 98.15%.

“This is a very commendable achievement and further dispels allegations by some who say the financial position of the state government is not strong.

“The state government is not only able to pay salaries without fail but also able to give bonuses to its employees, ” he said. 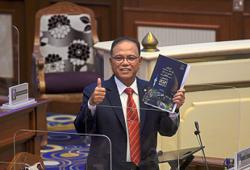