KLANG Municipal Council’s (MPK) initiative to address the issue of abandoned vehicles in various parts of the municipality has kept its enforcement officers on their toes.

Council president Dr Ahmad Fadzli Ahmad Tajuddin said the council had received complaints about abandoned cars, that were either damaged or with parts stripped off, from numerous areas in Klang. “Data from our Complaints Department show that in 2018,374 reports of abandoned cars were received.

“MPK has removed 284 vehicles while 90 cases are pending action.

“From January to October this year, we received 335 complaints.

“Some 168 vehicles have been removed while investigations are still being carried out on 167 pending cases.

“The investigations include getting ownership records from Road Transport Department and checking with the police.

“We have to follow MPK’s standard operating procedure which states that a vehicle can only be towed once the stipulated seven or 14-day notice to the owner expires.”

The MPK notice is pasted on the abandoned car’s windscreen.

Fadzli said all necessary steps taken by the enforcement team would be documented as proof to vehicle owners who claim wrongful action and to prevent any possibility of legal action being pursued.

With regard to vehicles that were not towed away, he said those were due to verbal appeals from owners for extra time to resolve issues pertaining to their vehicles. MPK would act accordingly if owners failed to remove their vehicles within the given time frame, he stressed. He highlighted that most of the time, MPK would tow away cars that were left in areas that could cause potential harm, were obstructing traffic or blocking the path of emergency vehicles.

The towed cars are stored at the council’s depot near Jalan Tepi Sungai, while wrecks are auctioned off. Some of the unclaimed vehicles are discarded as scrap metal.

MPK does its part in controlling carbon footprint by giving away derelict vehicles to companies to harvest parts such as tyres, car seats, metal and other plastic items for recycling.

These items are often dismantled at the council yard before being carted off in lorries.

In 2018, the council earned an estimated RM100,000 in revenue after selling off 240 derelict vehicles, consisting of cars, vans, trucks and motorcycles.

MPK Enforcement Department deputy director Shahrul Hazri Abd Majid said the derelict cars were removed for obstructing public areas. He said the action was carried out under Section 46(1)(e) of the Street, Drainage and Building Act 1974.“Cars, motorcycles and even vans are classified as abandoned if the vehicles are left on the road or on the pavement in a state of disrepair, have been static in one place or not used, are without a registration sticker and causing hindrance or are a hazard to other road users.

“These will be towed away, ” he said.Shahrul reiterated that MPK was focused on removing cars abandoned in public areas as they were a public nuisance. He said the Enforcement Department would follow up on complaints received from residents and was aggressive in handling the issue of abandoned vehicles as this would help improve Klang’s image.

The council, he said, would remove derelict vehicles that were found along main roads outside high-rises, neighbourhoods with landed properties as well as in commercial areas.

He noted that the damaged and rusty vehicles that his team towed away commonly had broken windscreens and flat tyres.

Most of the time, the useful parts in an abandoned vehicle would have been cannibalised by the time MPK workers got to it, he added. “The association has raised the issue of abandoned vehicles to MPK as it is frustrating for people who live in the area because we lack parking space in residential areas, especially high-rises, and people are forced to park along the road, ” he said.

The association, he said, had observed MPK pasting notices on abandoned vehicles, giving their owners notice of the council’s intention to remove the automobiles.

“The association often receives complaints on abandoned cars and we make attempts to locate the owner.

“If it belongs to someone in the area, we will ask the owner to move the vehicle, ” said Devadass.

“We advise residents not to move a vehicle on their own as this can worsen matters.”

He said residents who come across an abandoned vehicle should inform the association which would then highlight it to the council.

“This is because MPK has the resources to trace the owner and have the car removed, ” he added. 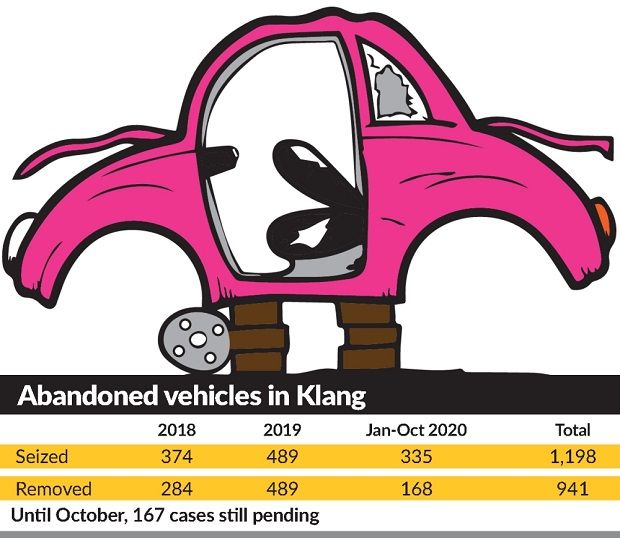