WOMEN can now participate in community works through the Relanita Pulau Pinang initiative which has created an avenue for them to volunteer and learn new skills.

Penang social development committee chairman Chong Eng said the Bridged Wanita was established in 2013 to carry out voluntary activities to strengthen the government’s efforts in ensuring the welfare of women.

“However, the direction of this volunteer team needs to be reviewed so that it is more in line with current needs of the society.

“The state government is actively addressing the issue of the gender gap that is still evident especially in decision-making and political representation.

“We established the Penang Women’s Development Corporation (PWDC) and the Gender Inclusion Policy to increase women’s participation and substantive representation in various fields.

“The state government also established the Women and Family Development Committee (JPWK) as a formal mechanism and structure of government to strengthen the development of women and families besides increasing women’s representation at the community level, ” she said.

She was speaking at the restructuring and rebranding of Briged Wanita Pulau Pinang to Relanita Pulau Pinang, which is an abbreviation for Relawan Wanita (Women Volunteers) at Dewan Sri Pinang in George Town recently.

Chong Eng said last year, JPWK from 40 state constituencies carried out 407 programmes based on women and family development, which had reached more than 90,000 participants.

“As of the third quarter of this year, JPWK conducted 294 programmes for more than 45,000 participants, which is an impressive achievement as we are battling the Covid-19 pandemic.

“This shows that our JPWK is resilient according to current needs by using technology effectively as some programmes are being held physically, through online platforms, or both.

Chong Eng added that hobby classes and workshops would be carried out for women to improve themselves.

“We will also conduct gender equality workshops and courses to let women better understand what is sexual harassment and the code of conduct.

Relanita Pulau Pinang is a restructuring of the all-women volunteer team in all 40 constituencies in Penang who reports directly to the respective state assemblyman.

The overhaul enables the volunteer team to work closely with the JPWK in organising activities to develop women and families.

PWDC chief executive officer Ong Bee Leng said Relanita would focus on providing a platform for women to participate in the community.

“Relanita is open to all females aged 18 and above with no criminal records.

“They have to support the development and welfare policies and programmes for women and their families. 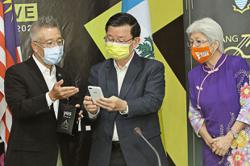