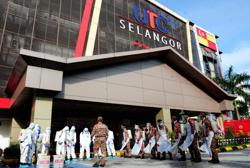 Norshuhadah (left) and Kanagavalli (third from right) plan to apply for all the subsidies and welfare aid under Budget 2021. In this photo taken before the MCO, they are seen with fellow bakers at Women of Will’s Community Kitchen.

PPR Batu Muda residents Norshuhadah Nasaruddin and Kanagavalli Subramaniam, both under the B40 group, plan to apply for all the subsidies and welfare aid they are likely to qualify for under Budget 2021.

“The Perlindungan Tenang social protection programme will be helpful as some form of coverage for my husband, since his job as a delivery rider is quite high risk and we both don’t have insurance coverage, ” said Norshuhadah.

“We will also try to withdraw money from my husband’s Employees Provident Fund (EPF) Account 1, though we will leave my account untouched for our retirement and future expenses.”

The 34-year-old said she welcomed any financial assistance as it would help with household expenses, including diapers and milk for her three-month-old baby.

“Having some extra money from EPF Account 1 and reduced employee EPF contribution rate, as well as from this year’s Bantuan Sara Hidup (BSH) and next year’s Bantuan Prihatin Rakyat (BPR), will help reduce our financial burden, ” said the mother of three, who sells frozen food from home to supplement her husband’s income.

Under the Perlindungan Tenang programme, all B40 aid recipients will be given a RM50 voucher to buy insurance plans such as life takaful and personal accident.

Finance Minister Datuk Seri Tengku Zafrul Tengku Abdul Aziz also announced that the government would allow contributors to withdraw their EPF savings from Account 1 on a targeted basis of RM500 a month, as well as reduce the minimum employee EPF contribution rate from 11% to 9% beginning January 2021.

Both initiatives would be for a 12-month period. Meanwhile, the government will replace this year’s BSH with the BPR next year.

Families with a monthly household income of less than RM2,500 and with one child will get RM1,200, while households with two or more children will receive RM1,800.

“My daughters are in Form Five and Form Three this year. The travel pass will reduce their schooling expenses.

“Jaringan Prihatin would be useful for my daughters since lessons are held online, ” she said.

“We spend about RM140 per month for Internet service. Most times, they follow their classes using their cellphones, although they sometimes share a laptop.”

Kanagavalli, whose husband passed away almost 15 years ago, said she appreciated any aid that would help reduce her financial burden.

“The money I received from BSH this year and hopefully BPR next year will be used for household expenses and to support my livelihood, ” said the 45-year-old, who sells perfume and makeup items to supplement her income.

Norshuhadah and Kanagavalli are full-time bakers at Women of Will’s Community Kitchen, and they said business was badly affected by the Covid-19 pandemic.

Under Budget 2021, RM1.5bil will be allocated to implement the Jaringan Prihatin Programme.

An estimated eight million individuals in the B40 category will be eligible for telco credit worth RM180, which can be used for Internet subscription or to defray the cost of buying a new cellphone.

A UTC functions as a one-stop centre for the public to access key government and private sector services, such as application and renewal of birth certificate, identity card, passport, postal as well as welfare services.

Housewife Suriyati Hussin, 58, from Taman Bukit Angkasa in Pantai Dalam said it was not a necessity.

She said the UTC in Pudu Sentral and Bandar Baru Sentul were only about 15 minutes away.

“I only go there to renew my passport once in five years and I do not see it as a hassle to go to UTC Sentul when the need arises.

“The funds could have been channelled to address other pertinent matters, such as affordable housing, ” she added.

While a UTC would benefit people in Kampung Kerinchi where most of the PPRs and low-cost flats in Lembah Pantai are situated, Lembah Pantai MP Fahmi Fadzil said he preferred having another PPR built as there was demand for public housing in the city.

“The Federal Territories Minister says there are more than 37,000 PPR units occupied in Kuala Lumpur and as many applications for them.

“About 1,000 have had their applications approved but there are no PPR units available for them to move into, ” he said.

“For the elderly, providing convenience to services is a necessity.

“Hopefully, the new UTC location in Lembah Pantai will be easily accessible for senior citizens and the disabled.

“We would love to see the efficient ‘MyTemujanji’ appointment application continued, putting an end to the typically long queues, ” she added.

Bukit Bandaraya RA president Charles Tan said the addition of a UTC was a positive sign but questioned its exact location, as Lembah Pantai was a large constituency.

“There is also a need to locate it near public transportation or with sufficient parking and access, ” he said.

“As Petaling Jaya is made up of a more mature community, it will make access to important services more convenient, rather than having to go to the UTC in Shah Alam or Pudu.

“It would certainly add value to the surrounding properties and benefit residents from B40 and M40 groups, ” he said.

To promote volunteerism at community level, Tengku Zafrul also announced that the government would set aside RM50mil to increase grants to RT from RM4,800 to RM6,000 each, which would benefit more than 8,000 RTs.

The grants for his RT are mostly utilised for operational costs.

He said that after settling all the bills, they only had a small amount left to organise small events.

“Despite the RT earning some income from rental of parking space and hall, we have to apply for grants from other ministries and get private sponsorships to organise events.

“Due to the Covid-19 outbreak, we are unable to get rental revenue and organise activities, ” Naidu added.

“Most of the funds received are spent on safety patrolling and organising activities for our community, so a boost in funding is welcomed.

“Being in an RT allows us to serve our community and get to know our multiracial neighbourhood, which is especially important now, ” he said.

Naidu, who is also the Sri Sakthi Vinayagar Temple Brickfields chairman, commended the government’s RM50mil allocation for repairs, maintenance and small development projects for places of worship in areas under the local authorities.

Tengku Zafrul said the allocation included the implementation of unity programmes in collaboration with the management of places of worship and local communities.

Naidu said the allocation would help the management of places of worship to cope with the decline in funds since the movement control order (MCO) started.

“There are seven employees at Sri Sakthi Vinayagar Temple Brickfields and our operational cost is about RM9,000 per month.

“Since MCO started, the temple has been using up its reserves, ” he said.

She explained that successful conservation of heritage buildings and sites were multi-dimensional and complex, and not limited to technical conservation such as addressing biological or structural decay.

“Cultural and architectural heritage is an incredible resource for the tourism industry, but it is important to recognise that their value goes way beyond being only tourism icons.

“Today, the cultural heritage industry knows that successfully conserving a site also requires taking into account various economic, social and environmental dimensions. It involves a wider range of stakeholders and organisations from both the public and private sectors.

“This RM10mil will be a start but more investment in terms of financial and human resources is needed to ensure that as a nation, we have a well-articulated set of heritage principles, policies and processes that protect and enhance our cultural and architectural heritage assets, ” said Cardosa, who is an International Council of Monuments and Sites board member and Malaysian Branch of the Royal Asiatic Society councillor.

“It could offer job opportunities to the younger generation and those who want to work nearer to home.

“Having commercial and medical facilities nearby will make it easier for residents to see to their shopping and healthcare needs, ” said Kampung Selamat RA chairman Anizam Samsuddin.

“The infrastructure should be planned for the long term to ensure there would not be problems such as floods and traffic jam.

“Personally, I feel the government should have placed more importance on human capital development in Budget 2021.

“It can be on sports, arts and culture or other aspects, which will benefit people better than having major developments, ” he added.