A landmark to remember

The pedestrian bridge breaking apart after being hit by a trailer carrying a piling crane at Weld Quay earlier in February. – Filepic

THE PENANG Island City Council (MBPP) will build a monument in remembrance of an iconic overhead pedestrian bridge that was damaged after a trailer crashed into it in Weld Quay in February.

Mayor Datuk Yew Tung Seang said the monument would be built at the spot where the bridge was located.

The overhead pedestrian bridge near the Pengkalan Raja Tun Uda ferry terminal in Weld Quay broke after a trailer carrying a piling crane crashed into it on Feb 5.

Yew said the remaining stairway of the bridge located next to the food court would either be retained as part of the monument or converted into something else.

“The monument or sculpture would be in some way a remembrance of the pedestrian bridge.

“If the structure is okay and can be kept, it will be.

“It will not be a big monument and will be located at the same spot where the current stairway is still standing, ” he said at a full council meeting held at City Hall in George Town on Thursday.

Pengkalan Kota assemblyman Daniel Gooi welcomed the move to have a monument installed.

“The original bridge is irreplaceable and preserving the remaining structure, a staircase that is still there, must be looked into carefully to ensure that it can be preserved.

“In my opinion, there should be some form of structure to preserve this piece of history in some way, ” he said.

On the likelihood of there being a new pedestrian bridge, Gooi said when the original bridge was there, many pedestrians were dashing across the road.

“Many did not use it and used to run across the road which was dangerous.

“Now there is a pedestrian crossing in place of the bridge. It is safer for the people. “The need to erect a new bridge would be subject to a traffic impact assessment study, ” he said.

Other parts of the bridge had to be fully dismantled as it was beyond repair and found to be structurally unsafe.

On Feb 5, a trailer that was transporting a piling crane from Padang Kota Lama towards Weld Quay crashed into the iconic landmark, causing it to tilt and nearly collapse.

The incident resulted in the overhead bridge being seriously damaged and prompted the MBPP to cordon off the surrounding area for removal of the bridge.

An old published article on the bridge, which then made its rounds on social media, had reported that the 105ft-long and nine-feet-wide bridge weighing about 20 tonnes, was part of an overall ferry expansion programme of the Penang Port Commission back then.

The article also reported that the bridge was installed in 1975 and was the first overhead pedestrian bridge ever built in Penang. 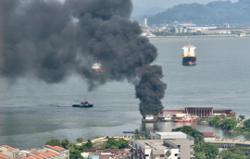 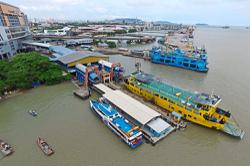