Ismat putting up a poster about the logo design competition.

JOHOR BARU: The people behind Pasir Gudang Kite Festival are organising a design competition for the event’s first official logo, 18 years after it began.

Its supervisor Ismat Salleh said the competition, ending on Nov 19, was held in conjunction with Pasir Gudang Municipal Council’s (MPPG) upgrade to city status next year.

“Aside from that, we also do not have an official logo for the museum since opening in 2002, so we thought this was a good time to hold this competition and get public participation.

“We are targeting 200 entries from all over Malaysia.

“Submissions must be original designs incorporating elements of Johor and the wau merak (peacock kite), which is unique to the state.

“Another important element to be included in the design is the windmill, as it is part of the museum’s building.

“Before the building was turned into a museum, it served as a windmill and we have retained its original structure until today so it is very significant to us, ” he told StarMetro in an interview.

So far, online submissions had been received from participants in Johor, Kelantan, Perlis and Sarawak, he said.

Ismat said only one design would be chosen and the designer would win RM3,000 plus a certificate.

“In line with MPPG’s change in status next year, plans to upgrade the museum’s interior are also in the pipeline.” Before the building was turned into the Pasir Gudang Kite Museum in 2002, it served as a windmill and the original structure has been retained until today.

He said this kite museum was the first and only one in Malaysia.

“We are continuously looking at ways to promote the museum and the beauty of kites, especially among the younger generation.

“Our visitors have dropped by at least 50% due to the Covid-19 pandemic.

“We previously saw many primary schoolchildren groups who took up packages that included a museum tour, talk and handicraft session on kite-making.

“They were also given the opportunity to fly their handmade kites at the vast Bukit Layang-Layang field, located just next to the museum, ” he added.

Ismat said the annual International Kite Festival had to be cancelled this year because of the pandemic.

The event, he said, usually attracted more than 1,000 participants from all over the world and helped raise more awareness of kites.

“We were supposed to welcome kite flyers from 54 participating countries this year, which is our biggest participation yet.

“A lot of exposure has been created since the first kite festival was held in 1995, which includes kite showcases, kite-flying competitions as well as workshops to teach primary and secondary school students about kite-making, ” he said.

Two types of kites are on display at the museum — the traditional wau and international kites from Brunei, Indonesia, China, Japan, South Korea, Turkey and numerous other countries.

The museum is open to the public from 9am to 5pm daily (except Thursdays for sanitisation) including public holidays.

Entry fee is RM2 for adults, RM1 for children and RM3 for non-citizens. 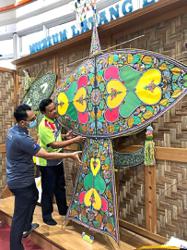