Au proposed that the Sungai Gombak Pre-Treatment Plant be relocated upstream to prevent possible contamination of the water source from the nearby dumpsites.

THE sight of rubbish and construction waste strewn at the Sungai Gombak riverbank has some nearby residents worried.

This is especially so because most of the unscheduled water disruptions experienced by consumers in the Klang Valley this month have been caused by contamination of raw water sources.

Residents also expressed concern that a rubbish dumping site in Kampung Sungai Salak, Gombak, Selangor, was situated too close to the river.

A visit by StarMetro to the site found two large rubbish bins placed on a piece of land next to a bridge connecting Kampung Sungai Salak to the main road, Jalan Gombak.

During our visit, motorists were seen stopping by to throw their rubbish into the bins.

Construction waste and burnt garden waste were also seen at several locations along the Sungai Gombak riverbank, believed to be left by contractors.

A nearby resident who only wanted to be known as Alif, 27, said the rubbish dump had been there for several years.

“The bins placed here are not enough to cater to the volume of rubbish generated, although the garbage collector comes to collect the waste on time, ” he said.

Meanwhile, Au Kean Hoe, 66, a Petaling Jaya resident who has been increasingly frustrated by the frequency of water disruptions, took a drive around Sungai Gombak to see the situation for himself.

He said the rubbish all along the riverbank could easily contaminate the raw water source.

“A downpour could cause rubbish to flow into Sungai Gombak.

“There are a lot of houses and shops along the riverbank too. The state government should relocate them.

“While driving here, I noticed a couple of rubbish dumps further upstream, ” he told StarMetro.

“The pre-treatment plant is at the ninth mile while the rubbish dump is at the 10th mile of Jalan Gombak.

“If the pre-treatment plant is relocated upstream and a river reserve area with fencing and security is created, we will not be experiencing the recurring problem of water contamination from the dumping of waste.

“As long as the plant is located downstream, we may have water disruptions, especially if the source of the contamination is from buildings located upstream.

“The buildings should not have been allowed next to Sungai Gombak and the authorities should tear down any illegal structures at the site, ” he said.

Au, who is originally from Penang, said there should be a fence to prevent people from going near the river.

“In Penang, all our water treatment plants are security zones.

“I remember going to the Ayer Itam plant when I was young but later, they did not allow visitors.

“In Selangor, most of the plants are located downstream, ” he noted.Location of plant

“Previously, it was built in areas with high water volume.

“But with development taking place near the river, whether legally or illegally, the water source risks being contaminated.

“However, domestic waste thrown into the river is not as severe as oil and other organic compounds.

“It really depends on whether the water treatment plant can cope with the pollution or not, ” he said.

Kalithasan said there were various ways to address the issue of water treatment plants located downstream.

“One of the most common ways is to relocate the plant but one has to look into the financial feasibility of such a move, as the operating and capital expenditure will be very high.

“The volume of water is one of the major factors to ensure there is enough to cater to all.

“Another way is managing pollutants at source and exploring better technology so that the plant can cope with a higher pollution limit.

“’Currently, diluting the pollutants is the solution to address pollutants in the water, ” he added.

A Selayang Municipal Council (MPS) spokesman said its Solid Waste Management and Health Department had conducted a check and found that no rubbish or leachate had leaked into the river from the bins.

“MPS had placed two 1,500-litre bins near the bridge, which is a central rubbish collection area.

“The contractor would collect domestic waste there every day and bulk waste fortnightly.

“Officers on the ground also found burnt garden waste and construction waste on the river bank.

“We have alerted the Drainage and Irrigation Department (JPS) as the site is under their jurisdiction, but we will assist if there is any clean-up operation.

“However, these areas are rather inaccessible and it will be difficult for heavy machinery to enter.

“We hope that residents will take care of the environment and throw rubbish at designated areas, ” he said.

“It is difficult for us to monitor as the site is located near the MPS boundary, ” he said, adding that he would bring the issue up with the council.

Pengurusan Air Selangor Sdn Bhd was contacted for comments but had not responded as at press time. 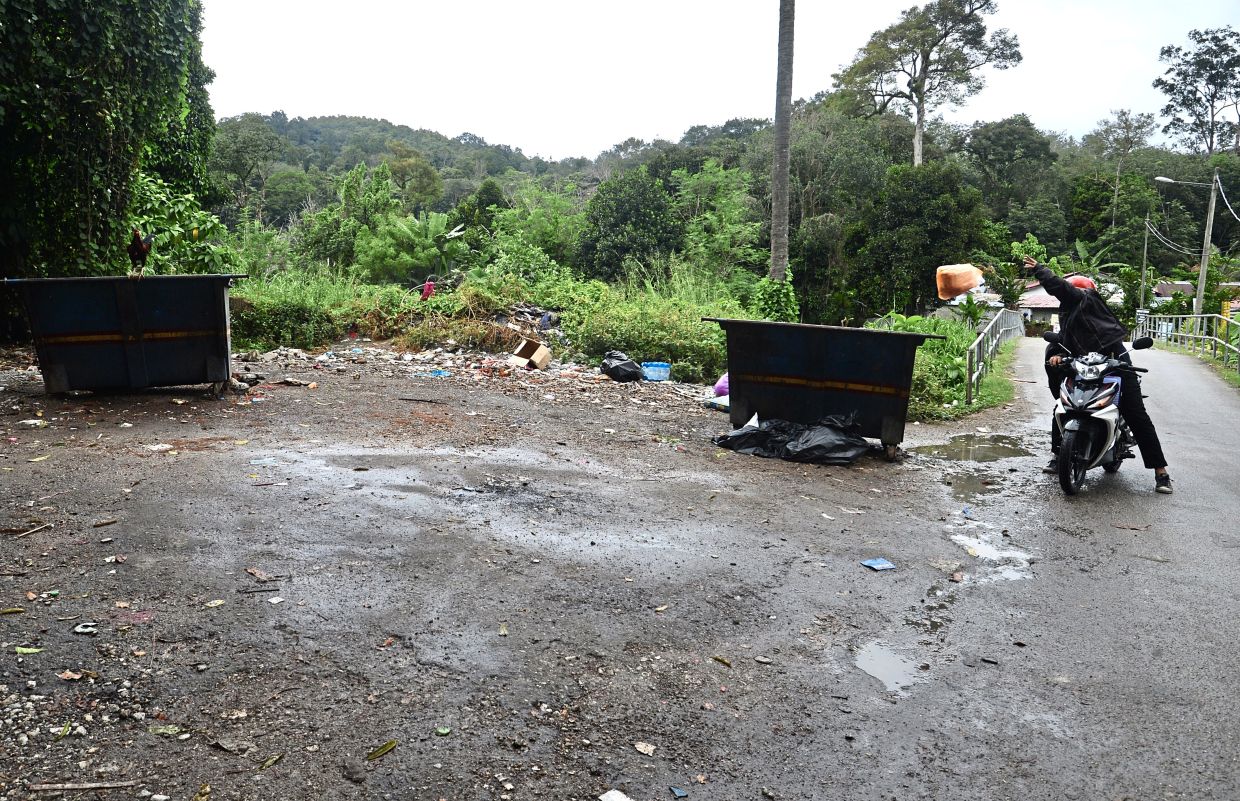 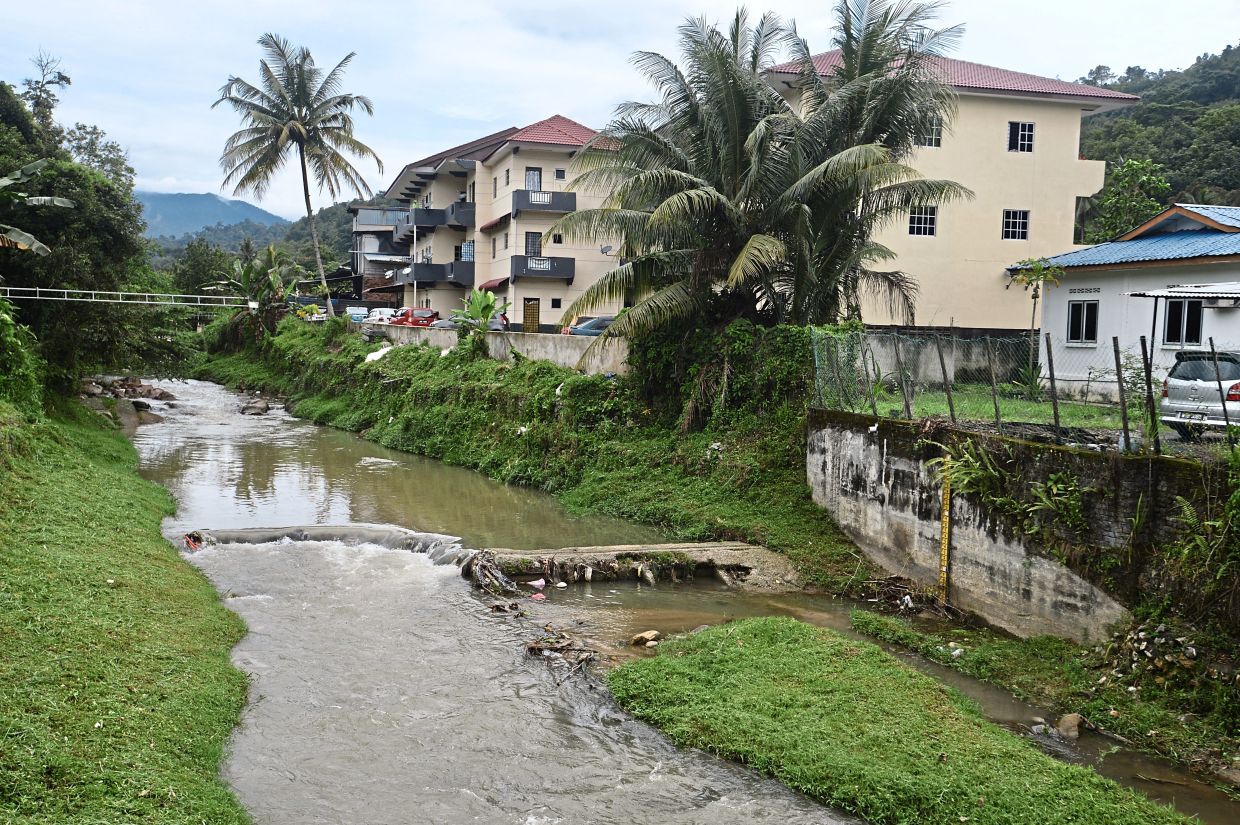 Au proposed that the Sungai Gombak Pre-Treatment Plant be relocated upstream to prevent possible contamination of the water source from the nearby dumpsites.

The Sungai Gombak pre-treatment plant is located at the ninth mile of Jalan Gombak.

Two large bins have been placed at the rubbish dumping site in Kampung Sungai Salak, Gombak.

Burnt garden waste can be seen at several locations along the Sungai Gombak riverbank.

A bridge above Sungai Gombak leading to several houses located at the riverbank of Sungai Gombak. Reporter: Jarod Lim

Many households in the Klang Valley had to go without water multiple times this month because of contamination of several rivers that are raw water sources. — Filepic