THE RM5 parking compound discount campaign by Seberang Prai City Council has received a lukewarm response from the public, with many fines remaining unsettled.

Council mayor Datuk Rozali Mohamud said that only 32,653 compounds out of 252,776 issued to motorists since 2017 had been settled since the promotion started in September.

“The ongoing discount promotion for parking and other compounds is held in conjunction with City Day and the Economy Recovery Plan.

“Throughout the period, parking compounds are discounted to RM5 for each violation, except for those cases registered for court action or those involving parking in lots reserved for the disabled.

“From September to Oct 20, the council received only RM191,715 in parking fines, ” he said after a council meeting at its headquarters in Bandar Perda on Thursday.

Rozali said that last year, 9,605 traffic cases were referred to the courts while 2,409 cases have been taken to court this year.

On compounds related to public health and veterinary offences, Rozali said that 539 compounds were issued.

However. 229 fines are still unpaid.

The council is also offering a 20% discount for signboard licence renewals.

Rozali said that despite the council having approved 350 signboards, only five licence holders have paid RM11,280 for renewal.

“The remaining 345 signboard licence holders will receive discounts for 2021 if they renew by the end of this year, ” added Rozali.

Compounds issued by the council’s Building Department recorded the lowest settlement under the promotion with none of them paid.

Rozali said 1,205 compounds were issued for various offences by the department.

“Each compound is only RM100 compared to the normal rate of RM250 and RM500 depending on violation, ” he said.

Those who wish to pay their fines may do so online via the council’s website at www.mbsp.gov.my. 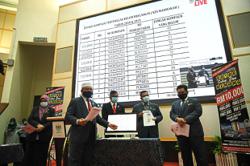