(Far left) Some back lanes in Subang Jaya are even monitored through closed circuit television cameras. — ART CHEN/ The Star

THE issue of gated back lanes in USJ, Subang Jaya, is not as clear-cut.

“We have not faced any problems from anyone regarding the back lane gates.

“More importantly, we received approval from the city council to do so, ” he told StarMetro.

Singam revealed that in the letter issued by Subang Jaya Municipal Council in 2008, it was stated that every household must have a key to the gate and it should be opened to allow maintenance work to be carried out.

The letter also stated that the council would not be held responsible if any untoward incident were to happen.

It also said that the council could cancel the approval if there were complaints.

“The households have a mutual understanding to allow access into the lane should the need arise for cleaning to take place or for authorities to enter.

“So far, we haven’t had any problems in our area, ” said Singam.

He stressed that residents should not instal gates on their own without consulting Subang Jaya City Council (MBSJ).

On illegal renovations and extensions into the back lane, Singam said they had not encountered any in their area.

“No one is allowed to obstruct the back lane by extending their kitchen space.

“They can build up, but not encroach outwards to the lane, ” he said.

StarMetro had contacted MBSJ on the matter, but at press time had yet to receive a response.

Meanwhile, in Petaling Jaya, former Bandar Utama 3 Residents Association chairman Lai Wing Fatt said the entire neighbourhood had had gated back lanes since 1995, after they experienced a spate of burglaries.

“We realised that most of the burglars entered from the back door, which is why we took the initiative to lock up the back lanes, providing houseowners with a key.

“During Chinese New Year in 1995, the neighbouring BU4 area had 14 break-ins in one week.

Its current chairman Phillp Khew said back lane gates were not a fire hazard.

“The gates do not prevent the Fire and Rescue Department from accessing the lane should there be an emergency because they can still get in, ” he said. 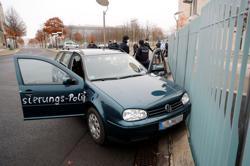