Some of the new drains are nearly completed. — Photos: LOW BOON TAT/The Star

IT WAS a harrowing moment for construction workers at the Kepong Baru morning market who had to battle vermin and a reptile during the drain upgrading work in the area.

Rats, cockroaches and even a monitor lizard were some of the pests that scurried out of the drains around the market as contractors started work a week ago.

Chandrasegar Baskeran and Lau Keng Wah of Optik Teknik Maju and Protrack Engineer respectively, are the site heads for the two construction companies that were contracted by Kuala Lumpur City Hall (DBKL) to undertake the drainage upgrade project.

They said the pests came out of the woodwork as machines started breaking up old drains.

“There were hundreds of cockroaches, which crawled up the workers’ boots and the trouser legs of some, ” the two men related.

Some pests invaded nearby shops, prompting the shopkeepers to bring out their insect sprays.

Chandrasegar also suffered the misfortune of falling into a metre deep drain during a site inspection, ending up in foul smelling, rubbish-filled sludge that came up to his thighs.

In addition, workers had to contend with rotting chicken carcasses and animal innards as they went about their work.

The rubbish, they said, was the main cause of the clogging that impeded water flow and caused flash floods in the surrounding housing area over the years.

DBKL Community Development and Urban Wellbeing Department Kepong branch manager Mohd Suhaimi Shariff said the contractors’ findings on the filthy conditions of the drains confirmed DBKL’s stand on the necessity for an upgrade.

“We could not carry out a pest control exercise at the morning market due to the congested layout of the trading stalls.

“But if we had allowed the pest problem to fester, traders and the population in general could contract leptospirosis due to the presence of rat urine, ” said Mohd Suhaimi. The upgrading work involves a lot of digging to widen and deepen the drains.

As it was, he said many of the illegal structures built by the traders were placed atop these drains.

Although covered by concrete, these structures were mostly used to store water and food, he said.

“So, at night, rodents and other pests from the drains could have infested these storage areas and contaminated the stored items, ” he added.

At press time, Lau and Chandrasegar said 30% of the drainage upgrading works had been completed.

They both agreed the time frame given by DBKL was a challenge, considering the amount of rubbish that workers had to wade through.

They said the construction team was clocking no less than 12-hour work days to meet the deadline.

The total length of new drains that will run through Jalan Bangau, Jalan Bangau 1, Lorong Bangau 2 and Jalan Camar is 925m.

In addition to the rubbish filled drains, construction workers had the challenge of avoiding underground pipes and cables that supplied water and electricity and facilitated telecommunication.

In one incident, excavators accidentally snapped an electricity cable, which caused a four-hour power disruption to some nearby shops.

The cable was located beside a drain covered by rubbish, thereby obscuring it from the contractors’ view.

During the process of excavation, illegal water pipes were also discovered hidden in the drain’s murky water.

However, Suhaimi said work to trace the culprits had to be put on hold as priority was now on completing the upgrading work.

“As all the traders have been relocated, it is impossible to trace the source, ” he said, explaining that the upgrading work would also see water pipes being replaced in the process.

“Most of these galvanised steel pipes were placed there about 60 years ago.

“We could see that rust had already set in inside the pipes, so most of them would be replaced with poly piping, ” he said.

Collaborating with DBKL on this project are Air Selangor, Tenaga Nasional and Telekom.

At present, some 31 shopowners along Jalan Camar are DBKL’s first batch of happy customers to enjoy the new drainage upgrade that runs a length of 140m, complete with steps as well as wheelchair ramp access.

Shopkeepers Shirly Tan and Mong Mei Woon, who have been operating here for 47 years, said although the initial stages of the demolition process was stressful due to dust, noise and reduced business, they were happy with the end result.

“After such a long time, the drains are clean, ” they said. 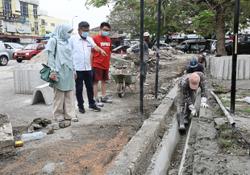