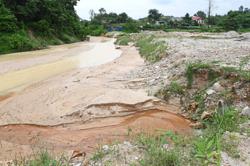 Rubbish and construction waste have been found dumped on a vacant land in Sungai Long, Kajang.

The council, following an enforcement exercise at Bukit Enggang in Sungai Long, Selangor seized and sealed a few parcels of land.

Investigations by the council revealed that the dumpsite operators had used the land for some time now without the landowners’ knowledge.

Nearby residents and regular hikers, who had seen smoke rising from the forest, had made complaints to MPKj.

Hee, who visited the site, said MPKj had sealed off the site on previous occasions.

“But one of the four affected landowners appealed, saying that he did not know of the illegal activity and that the dumpsite operator trespassed onto his land. “Now the dumpsite operators have chopped off more trees to make way for more rubbish, which is mostly construction waste, ” said Hee in a press conference during his visit.

The Selangor executive councillor said that aside from seizing the land, MPKj would clear away the rubbish and clean up the area.

During the site visit, MPKj seized a tractor and demolished a makeshift hut.

The site was believed to have been widened so that more rubbish could be piled up.

The illegal dumpsite operators also covered up burnt rubbish with soil that was dug from a hill nearby.

Hee, who is also Kajang assemblyman, said he was told by residents that the burning had been going on for three months.

“Those coming to the hill to exercise did not expose the burning activity for fear that the operators were gangsters.”

He said the rubbish was usually burned in the evening and midnight as well as at dawn.

“Although some of the residents may not have seen the smoke, the pungent smell is carried by the wind to the housing area, ” added Hee.