SIBU: Tucked in the Upper Baleh area where Bakun Hydro Dam is located, residents of Belaga want the Sarawak government to elevate it from a district to a division.

Kenyah Uma Baha Women’s Association Sibu chairperson Umie Liau said the Belaga residents had previously requested that the state government upgrade its status to a division given the vast development taking place in their area following the successful completion of the Bakun Hydro Dam.

“Belaga should not just remain a district in the Kapit Division.

“It is high time it is elevated to a division by itself,” she said.

Umie noted that Belaga, which is in the Hulu Rajang parliamentary constituency, has experienced population growth.

Umie said the elevation from district to division would bring much more development and prosperity to residents there.

“We have sacrificed for the construction of the two hydro dams, namely the Bakun and Murum dams.

“Thus, consider our request for a new status for Belaga,” she said.

In addition to that, Belaga has also contributed to the state economy through timber.

Belaga, which is 120km from Kapit, is populated by the Kenyah and Kayan ethnic groups.

Their longhouses are located along the Balui and Belaga rivers. 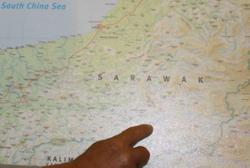