Need to get hubby’s consent

MANY young promising women with an interest in politics are often dissuaded by their husbands to play a role in society, said Chong Eng.

The Penang social development committee chairman described the phenomenon as the ‘biggest social obstacle’ in getting women to join politics.

“Some women need approval from their husbands to join social programmes or politics.

“We have bright women with potential but the question is, how to get the green light from their husbands?

“This is not progressive in terms of gender parity. If the woman insists and does not listen to her husband, it may cause problems in their marriage.

“Many women do not want to have marriage or family problems.

“That’s why they make the sacrifice and not join politics, ” she said while summing up her speech at the state assembly on Friday.

Chong Eng said she knew of a young bright woman who had to ‘slow talk’ her husband before she was allowed to join politics.

“For example, she does her household chores each time before attending workshops and her husband would have his share of housework to do, ” she said.

Opposition Leader Datuk Muhamad Yusoff Mohd Noor (BN-Sungai Dua) said to be a politician, a woman must first be interested in social activities or politics.

“As a politician, I do not get to stay home for a long time and if she is also involved in politics and is outside all the time, who is going to take care of the children?

Muhamad Yusoff said it was vital to cultivate interest in social activities among women so that they would get involved in politics.

“For those whose wives have shown potential, maybe we can provide counselling for the husbands to allow their spouses to participate in politics, ” he said. 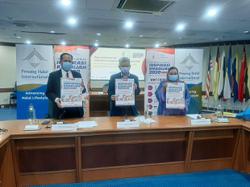