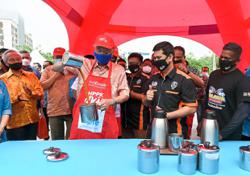 See Kooi Kuen, 68, who usually trades at night markets in the Johor Baru area, storing and arranging goods at her mobile stall following orders from MBJB to stop trading due to the recent rise in Covid-19 cases. — THOMAS YONG/The Star

JOHOR BARU: The recent order to temporarily halt outdoor markets in several local authority jurisdictions has not been well-received by many petty traders who have taken hit after hit since the Covid-19 pandemic started.

He said petty traders were frustrated as they had already been badly affected by the movement control order (MCO), which started on March 18, when they were not allowed to trade in the initial period in order to contain the spread of the coronavirus.

“The traders are just about getting back on their feet since being allowed to reopen their stalls in June during the conditional MCO.

“Most of the traders have just reached an agreement with their respective banks to begin servicing their loans when the moratorium ended in September, and are now reeling from yet another blow.

He said the association took steps to ensure that all standard operating procedures were adhered to for morning and night markets, including putting up signage to discourage patrons aged below 12 years old and above 65 years old from entering.

He added that they also made it a point to hire People’s Volunteer Corps (Rela) personnel to assist in temperature checks as well as ensuring shoppers register their visit via MySejahtera and sanitise their hands before entering.

It was reported that outdoor markets and trading sites within the MBJB areas, including Federal Agriculture Marketing Authority (Fama) markets, were ordered to temporarily cease operations starting Oct 16, while MPPG’s instruction came into effect on Oct 12.

MPKu gave similar instructions to the traders in its jurisdiction effective Oct 16 until Oct 30, but the previous two local councils did not give a deadline, saying the closure was until further notice.

Johor Indian Business Association chairman P. Sivakumar said the local councils’ directives took the association by surprise as there was no prior indication from Health Ministry about the severity of the Covid-19 situation in Johor.

While it was understandable that the local councils wanted to help the government to prevent the further spread of Covid-19, they could choose to halt outdoor markets in selected areas with positive cases, he said.

“The traders’ livelihoods are at stake and they are also left hanging as the local councils did not fix a date for when they are allowed to resume trading.

“This will lead to even more damage to the economy as the traders have a lot of goods stocked up because of the upcoming festive seasons such as Deepavali, Christmas and the year-end school holidays, ” he highlighted.

According to Sivakumar, since the annual Deepavali bazaar in the Johor Baru city centre had to be cancelled this year due to the pandemic, he hoped MBJB would allow the shops to set up tents at their shopfront for the festive season so that their goods could be cleared.

“Our association has come up with initiatives such as free online classes to help the traders, at least tide them over this difficult period.

“At the same time, we are hoping for some assistance from the state government and local councils in view of the temporary closure, ” he said.

He added that an e-bazaar platform, Warong Rider, launched by the Federation of Malay Hawkers and Petty Traders Associations would be available in Johor soon, covering Johor Baru, Tebrau, Iskandar Puteri and Kulai.

He said with the initiative, which had its soft launch in Batu Pahat, petty traders could sell their goods online and opt for delivery or pick-up with ease without having to set up physical stalls or shops. 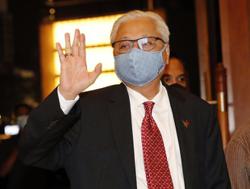