The state zoo is being upgraded to provide better living conditions for the animals here. — THOMAS YONG/The Star

JOHOR BARU: Johor government has channelled RM400,000 to carry out renovation works inside the state zoo.

Johor housing and local government committee chairman Ayub Jamil said the renovation work had already begun at Johor Zoo, which is the oldest zoo in the country.

“Despite the ongoing renovations, Johor Zoo remains open to the public every day.

“However, the opening hours are now from 9am to 4pm as part of its standard operating procedures (SOP) during the current recovery movement control order (MCO), ” he told StarMetro.

The Rengit assemblyman said work at the zoo was expected to be completed by the end of this year.

“Most of the work being done is to upgrade all the animal enclosures.

“This is to ensure that the animals will be better taken care of and be more comfortable, ” he said.

Located within a 12.5ha land along Jalan Gertak Merah here, the zoo was reopened on July 5 after closing for a few months due to the MCO.

It has been receiving a steady stream of visitors, both young and old. The last time the zoo underwent major renovations was 10 years ago.

In 2016, the state government approved the relocation of the zoo from Johor Baru to a 20.23ha land in Iskandar Puteri with a budget of RM53mil. However, plans have so far been put on hold.

Johor Zoo’s origins date back to 1928. It was originally a private menagerie for the Johor royal family but was opened to the public in 1962.

It is a popular attraction among locals and foreigners and received 50,000 visitors last year.

The zoo, which has 24 staff, houses indigenous and non-native wildlife with over 200 animals of various species, including tigers, bears, crocodiles, snakes, lions, deer, elephants and birds.

Among the highlights is the hippopotamus in their enclosure.

Tickets cost RM2 for adults while it is RM1 for children aged 12 and below. 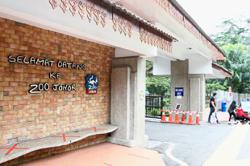