Status based on users’ self health assessment

An auxiliary policeman ensuring that a visitor has scanned the QR code using the MySejahtera app before allowing him to enter a mall in Kuala Lumpur.

AFTER having spent weeks at home during the movement control order (MCO), Hamzah Abdullah, 35, was elated to travel again when the ban on interstate travel was lifted under the recovery phase.

He decided to take a three-day trip to Cameron Highlands with friends to enjoy the fresh air and shop for fresh produce and souvenirs.

“I have no problem complying with the standard operating procedures such as having my temperature taken or writing down my details before entering any premises.

“I installed the MySejahtera application on my phone as soon as I learned about it in the media and I thought it was a good move by the Government, ” he said.

But his joy was cut short when the shop assistant of a premises he visited barred him from entering because his status on the MySejahtera app was “high risk”.

Users of the app can scan the quick-response (QR) code to record their entry at premises that have registered with the application.

This allows the authorities to trace individuals at any location should a Covid-19 positive case be detected there for up to 90 days, after which the data would be purged from the system. 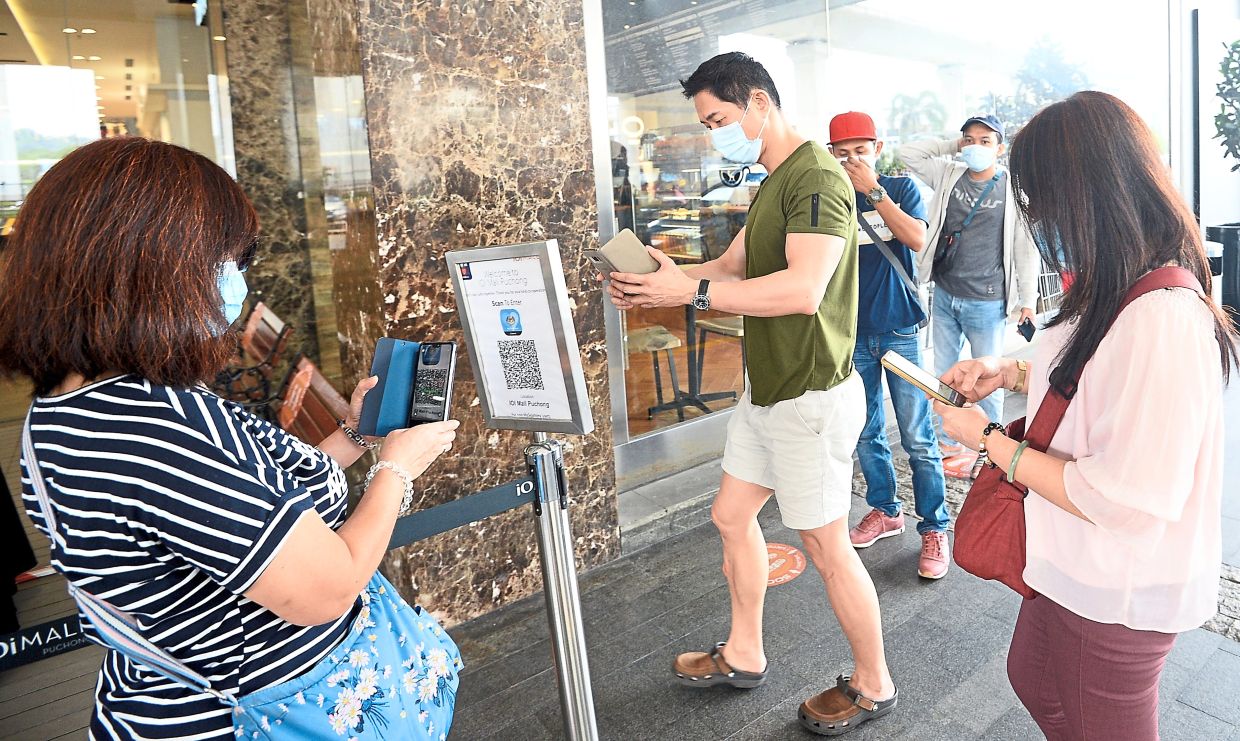 Visitors waiting in an orderly queue to scan the QR code before entering a shop in the Klang Valley.

A check by StarMetro on the MySejahtera website revealed that currently, all premises reserved the right to either deny or allow entry of high-risk visitors.

It added that “no rules have been set to deny entry for such visitors.”

“But how would the premises know if a person was considered high or low risk by MySejahtera if the person chose to record his details manually via the logbook?” a user who only wanted to be known as Faris, queried.

“If a person was considered high risk, he could simply not use the application in order to enter shops that turned away individuals deemed to be high risk.”

The 30-year-old said he was once barred from entering a mall in Kuala Lumpur after the MySejahtera app showed his status as “high risk”.

“I explained to the security personnel at the entrance that I had neither travelled to high-risk areas nor was I in contact with any Covid-19 positive persons, but he refused to let me in.

“He eventually relented after my temperature recorded lower than 37.5ºC.

“I think the authorities need to communicate more on the workings of the application to clear the confusion among the public, ” he said. Senior citizens are divided over whether or not MySejahtera should be made mandatory. While some say it would be inconvenient for the less tech-savvy elderly, some say they should adapt.

A check by StarMetro on the review section for the app found similar complaints. Complainants were advised by the application developer to write to mysejahtera@nasca.gov.my along with details and screenshot pertaining to the issue.

Public transport user Naenti Kaur said she noticed that her status changed from low risk to high within 20 minutes after scanning the QR code at two different locations.

“When I took the train from the Taman Paramount LRT station to KL Sentral, it confirmed my risk status as low.

“However, when entering KTM KL Sentral station before boarding the Komuter to Seremban, I saw that my status had changed to ‘high risk’, ” she said.

She had not downloaded MySejahtera and that she used only her smartphone camera to scan the code.

“I believe the status reflects the place and crowd size of the area I am visiting, and not the user, but I do not know for sure if this is the case, ” she added.

However, both Hamzah and Faris said their MySejahtera app showed their status as “low risk” when they scanned the QR codes after completing the self health assessments on the app.

This can be done by clicking on the “Risk Status” option in the app, after which users are asked to complete six yes-or-no questions on their symptoms, travel history and exposure to Covid-19 cases.

On its website, MySejahtera said users classified as Person Under Surveillance (PUS), Person Under Investigation (PUI) and Close Contact would be assigned the “high risk” status (refer to table).

“Similarly, non-MySejahtera users will also receive this status if they have answered ‘Yes’ to the health declaration in the check-in registration page, ” it said.

A spokesperson for MySejahtera said the “high risk” status reflected only the user and not the premises, and that this was determined based on their answers in the self health assessments.

“Anyone who installed the application and did not complete the assessment would be automatically classified as high risk.

“This is to encourage every user to complete the assessment.

“The algorithm of MySejahtera is designed based on the ministry’s epidemiological analysis and clinical guidelines, ” he explained.

Anyone who did not use MySejahtera to scan the QR codes would need to answer a yes-or-no question on whether they had close contact with a Covid-19 positive person, which would determine their risk classification, the spokesperson elaborated.

He said that although entry of high-risk persons was up to the premises to decide, the ministry was mulling over a directive to bar entry for such individuals.

“For now, we highly recommend premises to deny entry to users who are registered as “high risk” on MySejahtera, ” he said.

He reminded the public that they could add dependents on the MySejahtera app.

As of Oct 7, he said almost four million dependents had registered, in addition to about 21 million individual users and 920,000 business premises.

In August, usage of MySejahtera was made mandatory at all business premises.

Senior Minister (Security) Datuk Seri Ismail Sabri Yaakob said other applications such as Selangkah could still be used but alongside MySejahtera, and that exemptions would only be given to premises in areas that did not have stable Internet connectivity.

The Government had said on Aug 18 that it was mulling the idea of doing away with manual registration at premises and make MySejahtera the sole method to record details.

The MySejahtera spokesperson said once a Covid-19 case was discovered at a premises, health officers would be dispatched to conduct further probes in the area.

“Various factors will be looked into, including whether or not the person wore a face mask, the duration of their visit and the premises type.

“We will then look at how many people were at the premises based on the entries in the logbooks and MySejahtera.

“Based on all the gathered information, we will then decide how many contacts should be screened, ” he said, adding that the premises would be instructed to conduct disinfection.

The spokesperson said contacts would be notified by health officers from the district Health departments within 24 hours via MySejahtera, SMS or calls to visit the nearest health clinics to undergo screening.

“This includes further probing and some clinical examinations by doctors, before undergoing a swab test.

“They will then be classified as PUS before being asked to go home and observe a 14-day home quarantine, during which time they must complete daily health assessments in MySejahtera if they are experiencing any symptoms, ” he said.

Should symptoms emerge, the person would be reclassified as PUI by the application and would be asked to visit a health clinic or hospital, noted the spokesman.

“But if they are called, a team would be sent to pick them up, ” he added.

Early this month, social media was abuzz when users complained that MySejahtera did not list as hotspots the malls where Covid-19 cases were detected.

The spokesperson clarified: “Just because a Covid-19 positive person is detected at a premises, it does not mean that the virus has spread to everyone there.

“In order for a place to be declared a hotspot, it must either be a source of infection or has a potential to spread infections.”

“We will reach out to the contacts, and if they tested negative, it means the Covid-19 positive person did not get infected there nor did he infect anyone else, so the place is not considered a hotspot, ” said the spokesperson, who is also an epidemiologist.

He cautioned against declaring a premises as a hotspot unnecessarily.

“Doing so will cause panic among the public while putting unnecessary stress on our healthcare personnel, not to mention affecting business at the premises involved, ” he said.