The crack can be seen in the middle where the two buildings join. — Filepic

PENANG’S urban regeneration projects to rebuild low-cost housing blocks that are more than 50 years old have to be put on hold due to the Covid-19 pandemic.

State housing committee chairman Jagdeep Singh Deo said the first phase of a pilot project which involved replacing 300 old units of Mahsuri flats in Bayan Baru with new apartments was initially planned to start at the end of this year.

“However, due to the pandemic, the redevelopment project has come to a standstill, ” he said at a press conference on Monday.

He said Penang was supposed to take the lead in urban regeneration initiatives in the country as there were no current laws implemented for such schemes and the Strata Title Act did not provide for such redevelopment.

He noted that discussions with the Federal Government on the redevelopment plans had also been halted due to the change in the ruling coalition.

“For now, we can only look at rectifying the structural issues of aged housing schemes on an ad hoc basis since we can’t start the urban regeneration projects yet, ” he said. A cordoned-off corridor at the aged Taman Free School walk-up block due to a large crack from top to bottom.

Jagdeep said an independent consultant had been appointed to survey the housing schemes.

The consultant has also been tasked with evaluating major cracks discovered at one of the blocks of the Taman Free School Flats.

“We are expecting the consultant to get back to us in two weeks with a report.

“We will continue to monitor the situation for now, ” he added. -Bernama 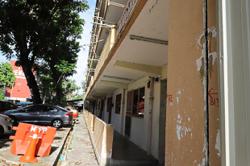