Border issue on the table

JOHOR BARU: While more people are dining out now compared to the previous phases of the movement control order (MCO), many restaurateurs are still struggling to make ends meet because clientele is still down by as much as 70% in some eateries.

The restaurants are hoping that the reopening of the border with Singapore will happen soon after almost a seven-month hiatus since March 18 this year.

Many are optimistic about the border reopening, especially with the number of cases in Singapore dropping drastically to a single digit in recent days.

However, there are worries now because of the sudden spike in Covid-19 cases in Malaysia over the last few days.

Johor Baru Chefs Association chairman John Ang said many people were still hesitant about having their meals in restaurants with the current rise in Covid-19 cases.

“Our association represents more than 300 restaurants in the city and many are struggling to survive because of the lack of customers.

“This situation is made worse by the closing of the Singapore border because quite a high percentage of diners are Singaporeans, ” said Ang, adding that sometimes, Singaporeans would travel across the Causeway just to patronise their favourite eateries.

Besides depending on regular customers, some restaurant owners are coming up with new dishes and campaigns to attract new customers.

Lennox Cheok, who oversees the operations of Evergreen Restaurant in Sutera Mall here, said his customers were glad they could still enjoy their favourite dishes freshly cooked at the restaurant as long as they followed the standard operating procedures.

“We use social media to reach out to existing as well as new customers to make up for the lack of Singaporean diners.

“We are also working with delivery companies to provide home deliveries and come up with various promotions to draw in more people, ” said Cheok, who assured that the restaurant strictly adhered to safety and cleanliness guidelines.

He expressed hope that the two land borders with Singapore would reopen to allow for the local Johor economy to recover again.

Another restaurant owner from Taman Universiti in Skudai, Taufik Zainal, said despite offering home deliveries, business was still down by 70% and business only improved when the recovery MCO was announced on Aug 28.

“I had to think out of the box because I could not only depend on my regular clientele and so I came up with some recipes which are not so common such as roti canai burito and itik salai lemak cili api, ” said the owner of Lesung Ibu.

He was thankful that his local customers continued to patronise his outlet.

Meanwhile, K. Paranjothi said he closed his shop, Sarvani Catering in Taman Johor Jaya, when the MCO was announced in March and decided to do charity instead.

“I knew many people were struggling and since I could not open for business, I had the idea to cook and pack food to distribute them out for free.

“We prepared some 600 packets of food daily for around two months.

“Now, I am back in business and I have the continued support of my regular customers, although business has definitely dropped, ” he added.

“Before this, we took around 15 bookings a month, but now we only get one or two because gatherings are not allowed, ” he said.

The recovery MCO is in effect until Dec 31 and tourists are not allowed to enter the country. 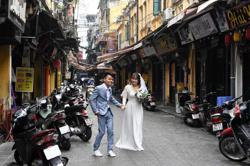